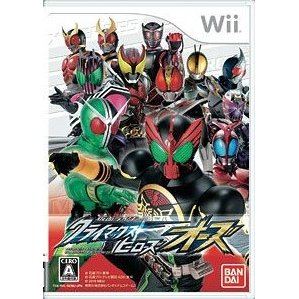 Riders from Cougar to Oz breaks through the boundaries that separates their series in this game. See who is the best fighter, each rider has his own element, select the play style suitable to him and gain advantage over your opponents in the fighting ring.The game has powered up these men with more skills; speed up, strength up and defense up. And as you fight, you'd hear the familiar background themes, making the whole tournament even cooler.It doesn't matter that you have never played a fighting game before, or have not heard of the Riders. The game comes with the Simple Mode so that beginners can try out the different styles to see which one serves you best.

If you are familiar with Kamen Rider Climax Heroes OOO, why not let others know?

As a fighting game, there is much to be desired. The combo and special attack system are one dimensional, with little more depth than wait for the enemy to attack, block it, and counter attack during cooldown. At any free chance you have, you can charge your special meter, and when it's full, you attempt your special as many times as you want in succession until it hits, without any penalty. At least, it always hit the enemy on the second or third try when I used it, even on the hardest difficulty. What follows is a long cutscene in which your character executes the move for huge damage, or a short mash the button game which you can easily win by pressing O at least once a second, then the move goes through. Based on the huge roster of characters, each of which might have multiple forms, I assume a lot of attention went to pleasing the fans. The attacks and specials seem to be faithfully recreated for Rider fans. The controls respond well, even if the hit detection is a little bit blocky. All in all, I recommend it strictly to Rider fans who will appreciate playing as their favorite characters. Fighting game fans will not appreciate the huge amount of broken spam tactics and lack of depth in this game.
[This review is based on another version of this product]
erikqkh (1280) on 04, Jan. 2011 02:33 (HKT)
Climax Heroes
Like the title said, it's all about CLIMAX!
1 »