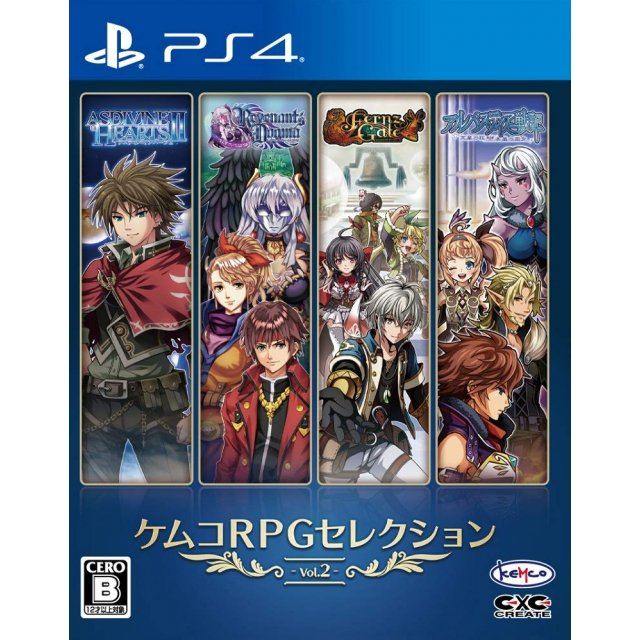 Asdivine Hearts II
Picking up two years after the events of their first adventure, Zack and friends find themselves off on another quest, but this time to save the parallel world of Archelio, which is on the verge of being frozen in ice.

With a convenient summary of the previous title included, players can jump right into Asdivine Hearts II without having played the first!

Utilizing a brand new team system, leading up to six characters into battle, and destroy onslaughts of powerful foes! See the amalgamation of years of RPG-crafting expertise and plug-in jewels to boost character parameters as the beloved rubix makes its triumphant return.

Upgrade rare weapons to make one’s own personal slayer of evil! Dispatch buddies to earn Guild Coins while the party works on their quest! Or simply equip their jewels to learn their skills!

Revenant Dogma
Caine enters a ruins site in search of a feral relic said to be left behind by the gods and meets a mysterious girl in a mask. This strange encounter becomes the catalyst for a grand scheme that will change the worlds of humans and therians.
Will this new-found power lead to prosperity or destruction?

Have a 3D battle experience full of ambiance featuring transformations that enable various skills and Bursts that can deal massive damage. Weapons can be customized to increase their power or be imbued with various effects.

Fernz Gate
After waking in unfamiliar woods, Alex, an ordinary high schooler living an ordinary life, learns he has somehow ended up in Fernland, a world dominated by conflict and destruction.

Fighting monsters, the ever-ominous threat of the Overlord, and a succession of chaotic events as he tries to find his own place in this new world, Alex comes across Lita, a young woman from a peaceful world like his own.

Hitting it off, they soon become friends and set out together, but what hidden truth awaits them as their adventure begins to unfold…?

Alvastia Chronicles
After encountering the man who killed their parents ten years prior, Elmia, a priestess; and Alan, her brother, and protector, set out to avenge their deaths as they fight to stem the tide of monsters flooding into the upper world, and restore peace to Alvastia.

However, in their quest to amass an army of diverse companions with the same goal, will they really be able to gain the strength necessary to bring their parents’ killer to justice, and save the world…?

Do you have what it takes to recruit them all? Encounter more than 100 companions as Alan and Elmia travel the world.

Engage in heated battles with up to 13 party members.

Stranded Sails: Explorers of the Cursed Islands
US$ 40.99

No reviews for Kemco RPG Selection Vol. 2 yet.