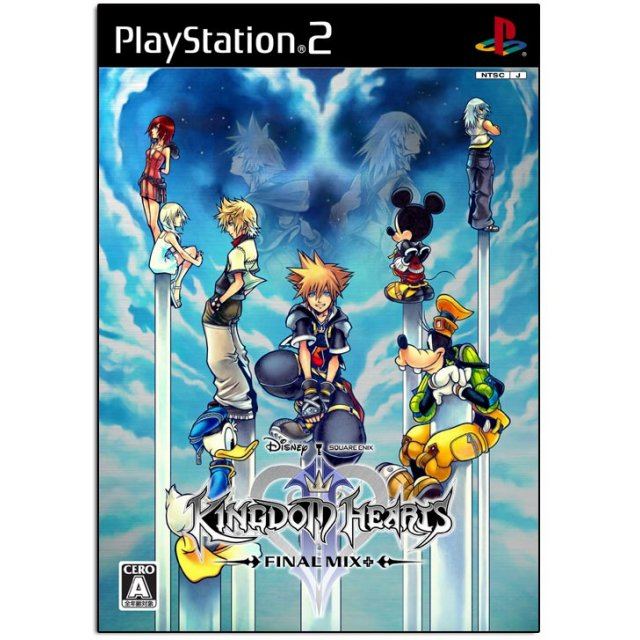 Based on Square-Enix's popular action adventure game Kingdom Hearts II, the game returns as "director's cut" Final Mix+ edition in Japan. As it's common for top sellers in SE's franchise, this final cut edition contains a couple of new interesting features, targeted to fans of the series as well as those that haven't played the game before.New features are:English Voice CastNew Explorable Areas as well as redesigned navigation mapsA new "Serious Mode" DifficultyNew scenes that were featured in the Japanese manga have been added to the gameNew boss battles against the mysterious Orginization XIIIA fight that was a cutscene in the original is now playableThe censored parts of the game are no longer censoredAll Difficulty modes have been tweaked upThe game also contains a second disc which features a remake of the GBA game: Kingdom Hearts: Chain of Memories, which is titled Kingdom Hearts: RE: Chain of memories. This Game's features are:Rendered in fully 3DKHII's Reaction commands systemNew Cards and boss battlesNew scenes and previous scenes are fully voiced in JapaneseSave data affects Kingdom Hearts II: Final Mix

If you are familiar with Kingdom Hearts II Final Mix+, why not let others know?

kc_karthik (3) on 11, Jul. 2011 13:26 (HKT)
A whole new experience once again
KH2 Final Mix+ not only adds tons of new stuff to the main game but also has the well lover Chain of Memories (CoM) game from GBA. CoM Final Mix+ is completely overhauled to 3D controls and much better graphics. This game is a much have for any KH lovers. The spoken language is still English and the menus/commands are in Japs.
vinnie (3) on 02, Dec. 2010 08:13 (HKT)
Wow so much more than the English version
proud owner of KH FM as well as KH2 FM+ and this isn't the same as the PAL version there's uddles of extra content new areas, costumes new "Limit Drive" weapons super secret boss fight aka lingering Sediment and lets not forget bonus cut scenes and the Roxas cs is now a boss fight there's the remake of KH chain of memories made for the GBC now fully remade for the ps2 2 games in one this is a true master piece.
TheKeybladeMaster0021 (7) on 25, Jul. 2009 09:07 (HKT)
Love it!
This is the most awesome Kingdom Hearts game I've ever played other than the second one! If your a Kingdom Hearts or Final Fantasy fan like I am, you would be so crazy not to get this! Please get this!! You will not regret buying it!
liendungle (1) on 24, Jun. 2009 05:36 (HKT)
Help
Hey I ordered this game and it says i need a format disc where can i get one??? Please i really wanna play this game.
ross11g (1) on 06, May. 2008 08:08 (HKT)
Awsome!!!
mine just got shipped i cant wait to get it!!!
1 »