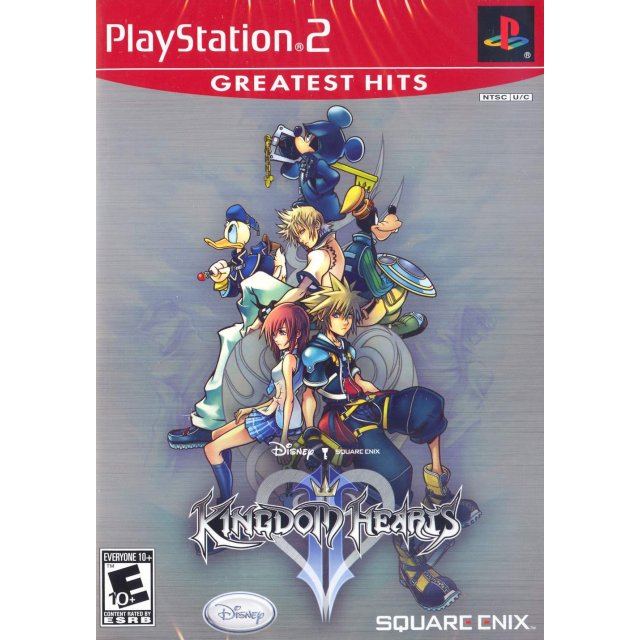 Square Enix
Rated
By Our Customers
Compatible with PlayStation 2™ (PS2™)
For US/Canada systems.

In Kingdom Hearts II, players travel through the worlds of Beauty and the Beast, The Lion King, Mulan, Pirates of the Caribbean, Steamboat Willie and Tron as well as revisit worlds from the original, including Aladdin, Disney Castle, Hercules, The Little Mermaid, Winnie the Pooh and Tim Burton's The Nightmare Before Christmas. The game features more than 100 Disney characters, and also introduces new, original characters such as Roxas, members of Organization XIII and the Nobodies, all designed by Square Enix's Tetsuya Nomura, director and character designer of the Kingdom Hearts series.Kingdom Hearts II features a new and improved real-time battle system which provides an increased selection of commands, such as performing special attacks and cooperative attacks with members of your party, adding strategy to the gameplay. Players can also perform the "Drive" to transform main character Sora into his various forms, altering his skills and abilities. Examples include the Brave Form, where Sora absorbs the power of Goofy allowing him to use two Keyblades; the Wisdom Form, where Sora absorbs the power of Donald allowing him to increase his magic power; and the Master Form, where Sora absorbs the power of both Donald and Goofy and increases both his attack and magic powers. These new features bring additional challenges and excitement to the players and further enhance gameplay.

If you are familiar with Kingdom Hearts II (Greatest Hits), why not let others know?

A must buy game for the PS2.
[This review is based on another version of this product]
leo23 (68) on 27, Mar. 2013 21:59 (HKT)
Great
great game at a best price, Thank you
darkinthecorner (27) on 24, Nov. 2011 07:30 (HKT)
Good Sequel, Better than the Original
KH II excel its predecessor at almost every aspect. Despite being less developed on the Disney side of the story, it does have a more mature story using its original elements, which relates to the characters being grown up. The introduction with Roxas is incredible to play at and the Rikku's storyline shows how much he matured. The battles are better developed and the system overall got an improvement. A must play on PS2.

Pros: Improved battle system, matured characters and storyline.
Cons: Gummi Ship travel still exists. Could have more of Disney related story.
Gar0X (150) on 15, Oct. 2011 23:22 (HKT)
Just as expected for a sequel of Kingdom Hearts. Perfect
Kingdom Hearts is a perfect series from every aspect
It has well known characters from Disney and Square's Final Fantasy franchise. It has an original story than perfectly fits with these characters. It has solid gameplay. It has smooth graphics for its time. Basically it's perfect game and it definitely a must for every PS2 owner
1 »