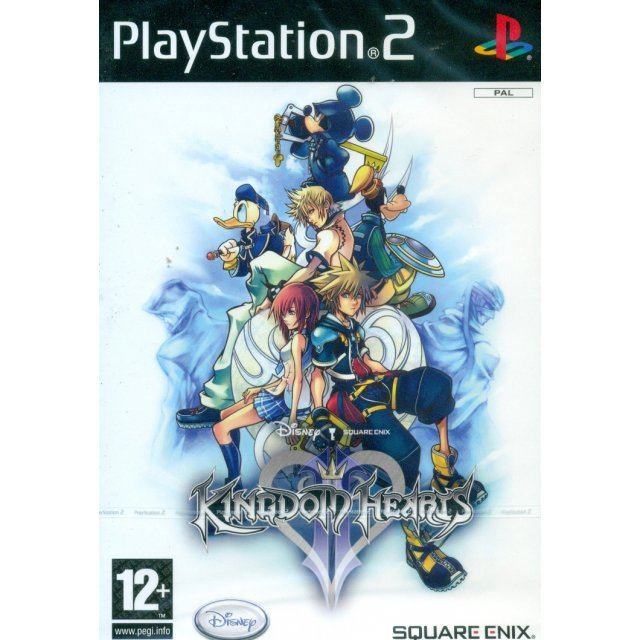 Collections
Square Enix
Rated
By Our Customers
Compatible with PlayStation 2™ (PS2™)
For PAL systems only.

In the previous work, for world peace, Sora had to leave behind the king of Disney, Mickey Mouse, and his friend Riku and closed the gate. But just before the gate closed, the king said he would find the door of light to escape, and so Sora, with Donald Duck and Goofy embarked on the journey to find the king and Riku. On the way, Sora met up with a mysterious dark figure who led them to a secretive castle and the king and Riku had actually been there previously. Sora found an important key for their journey but he started to lose his memory...One year later, in Twilight Town, where there is neither day nor night, the story picked up again from a youth. Secret organization, XIII, incoming crises, what is waiting in the end for Sora?Kingdom Hearts II is the sequel to Square-Enix mega-hit "Kingdom Hearts". The biggest feature of the game lies in having both Disney cartoon and movie characters and Final Fantasy's more well-known characters making their appearances, letting different characters to meet in this fantastic world.Disney worlds and characters that made their appearances in the last work will still star here, like "Beauty & the Beast", "Aladdin" and "Little Mermaid". Additionally, some other productions have also been included, such as "Mulan", "Steamboat Willie", "Pirates of the Caribbean" and more.This time, even the battle elements have been buffered by new members. Besides newly added magic and the combination move of Donald Duck and Goofy, the most significant one is the "Drive" system tying abilities to different outfits. For example, if the "Wisdom Form" is donned, the normal "battle" command will change to firing magic projectiles and many similar innovations, making the battles more lively and exciting.

A must buy game for the PS2.
leo23 (68) on 27, Mar. 2013 21:59 (HKT)
Great
great game at a best price, Thank you
[This review is based on another version of this product]
darkinthecorner (27) on 24, Nov. 2011 07:30 (HKT)
Good Sequel, Better than the Original
KH II excel its predecessor at almost every aspect. Despite being less developed on the Disney side of the story, it does have a more mature story using its original elements, which relates to the characters being grown up. The introduction with Roxas is incredible to play at and the Rikku's storyline shows how much he matured. The battles are better developed and the system overall got an improvement. A must play on PS2.

Pros: Improved battle system, matured characters and storyline.
Cons: Gummi Ship travel still exists. Could have more of Disney related story.
[This review is based on another version of this product]
Gar0X (150) on 15, Oct. 2011 23:22 (HKT)
Just as expected for a sequel of Kingdom Hearts. Perfect
Kingdom Hearts is a perfect series from every aspect
It has well known characters from Disney and Square's Final Fantasy franchise. It has an original story than perfectly fits with these characters. It has solid gameplay. It has smooth graphics for its time. Basically it's perfect game and it definitely a must for every PS2 owner
1 »