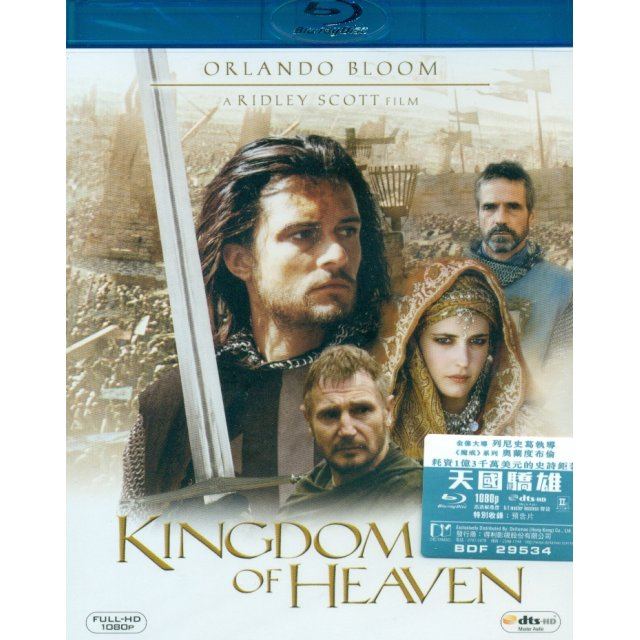 Ridley Scott directed this epic-scale historical drama inspired by the events of the Crusades of the 12th century. Balian (Orlando Bloom) is a humble French blacksmith who is searching for a reason to go on after the death of his wife and children. Balian is approached by Godfrey of Ibelin (Liam Neeson), a fabled knight who has briefly returned home after serving in the East. Godfrey informs Balian that he is his true father, and urges the blacksmith to join him as he and his forces journey to Jerusalem to help defend the holy city. Balian accepts, and he and Godfrey arrive during the lull between the Second and Third Crusades, in which the city is enjoying a fragile peace. Both Christian and Muslim forces are temporarily in retreat, thanks to the wisdom of the Christian king Baldwin IV (Edward Norton), his second-in-command Tiberias (Jeremy Irons), and Muslim potentate Saladin (Ghassan Massoud). Violent agitators on both sides are foolishly eager to end the peace in a bid for greater power, and Saladin bows to pressures from Muslim factions; Godfrey is one of a handful of brave knights who has thrown his allegiance behind Baldwin IV and his community of diversity, and Balian joins him as they use their skills as warriors in a bid to build a lasting peace. Kingdom of Heaven also stars Eva Green as the princess Sibylla, David Thewlis as Hospitaler the priest, and Brendan Gleeson as Reynald.

If you are familiar with Kingdom of Heaven, why not let others know?

visvass (45) on 30, Apr. 2011 21:16 (HKT)
Great epic film,Kingdom of Heaven
The movie has as a background the historical clash between Islam and Christianity that started since the birth of the former and where Christianity was most on the time on the defensive until the Crusades came about. This movie is a must for people who like history, epic movies, good acting and of course Orlando Bloom. Picture quality is amazingly clear with lush colors.
bodhid (2) on 28, Apr. 2011 00:55 (HKT)
Theatrical cut
Just to confirm for anyone wondering: If you're like me and prefer the theatrical cut to the director's, this is the edition you want. Be aware, however, that there are no extras on this release except for the theatrical release trailer. That fact isn't going to prevent me from giving this movie and this particular disc 5 stars.
a.zaytsev (158) on 25, Apr. 2011 18:54 (HKT)
Fantastic action movie!
Fantastic action movie. Good cast. Good blu-ray release.