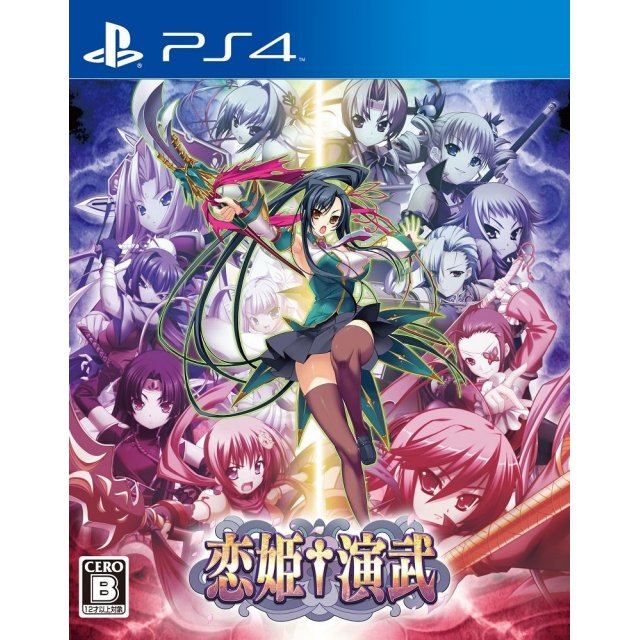 BaseSon
Rated
By Our Customers
Compatible with PlayStation 4™ (PS4™)

Works on all systems sold worldwide, a correct regional account may be required for online features.
24h In stock, usually ships within 24hrs. (Only 1 left in stock.)
US$84.99
Manufacturer
BaseSon
Rated By Our Customers
Compatible With PlayStation 4™ (PS4™)
Version

Works on all systems sold worldwide, a correct regional account may be required for online features.
24h In stock, usually ships within 24hrs
(Only 1 left in stock.)
Price
US$84.99
Play-Asia.com Return & Refund Policy
Click on a thumbnail to see more pictures for Koihime Enbu

If you are familiar with Koihime Enbu, why not let others know?

Ichiei973 (6) on 21, May. 2016 00:41 (HKT)
A good game
Funny game with characters from the anime series Koihime Musou.
Hayato01 (503) on 23, Apr. 2016 12:48 (HKT)
a good game
The game is fun, but it would have been nice if they could have included all of the characters that were introduced in the San goku Koihime series.
strife2188 (149) on 18, Apr. 2016 11:03 (HKT)
Good fighter
It is a good fighter with lots of characters to choose from.
JoshuaKadmon (8) on 22, Mar. 2016 22:26 (HKT)
Far Exceeded Expectations
I bought this for 2 reasons, first because I purchase practically every new fighting game I can get my hands on, and second because it had an all-female roster. Aside from that, I had no great expectations for the game. The game is way meatier and more strategic than I initially gave it credit for. It's tough, too, but it always felt fair in its challenge, not cheap like many fighters with artificial difficulty spikes. The play modes are solid and varied, including some in-depth training tools. Character models (2.5D) are slick, and the whole thing has a classic arcade feel to it. There are 13 playable characters, and most of them have access to a choice of 2 strategists (7 total) that act as assist characters. The characters' personalities were interesting enough, though story content was probably the game's weakest point. It's mostly very minimal visual novel stuff, with a fair amount of voiced dialogue between fights in scenario or arcade modes. It honestly could've benefitted from more cutscenes or still-frame H scenes like its eroge counterpart, if only to keep things more mature and interesting (just Cero D level, not asking for full-on hentai here). But that's minor and pretty subjective. The core gameplay here is spectacular, and against other PS4 2D fighters like Blade Arcus and Nitroplus Blasters, I would easily say this is a better choice.
ndagroove (42) on 12, Feb. 2016 09:58 (HKT)
Solid Fighting game that lacks depth
Koihime Enbu is a really enjoyable 2D fighter. Graphics are clean, fighting is solid. However, this title lacks different game modes as survival and time challenge. Story mode is good! Overall if a big Koihime Musou fan give it a shot!