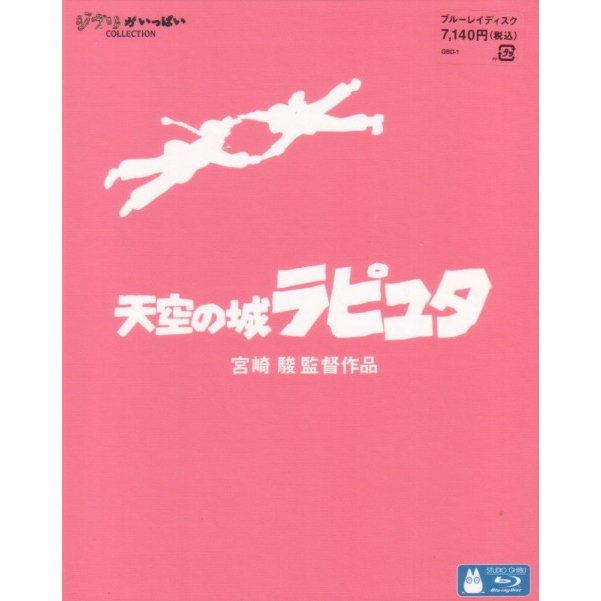 Laputa The Castle In The Sky

5-15d Expected stock arrival within 5-15 days.
US$55.99
Our previous price:US$ 67.90
You save: US$ 11.91( 18% )
Please take note that, once purchased, this item must be paid immediately and cannot be cancelled or returned.
Manufacturer
Pony Canyon
Version

If you are familiar with Laputa The Castle In The Sky, why not let others know?

aoshi00 (57) on 04, Aug. 2011 09:13 (HKT)
One of the best Ghibli movies no on Blu-ray
Laputa and Nausicaa were some of my favorite Miyazaki movies. So far only Laputa, Nausicaa, and Whisper of the Heart from the older works have been released on blu-ray (not counting the newer Ponyo or Arriety).

The picture is crystal clear, I have seen the film many times on TV, VHS, or DVD before but never beautiful like this. There are multiple languages of dub and subtitle as well, including the alternate version for the US Eng. dub. Also there is Jpn subtitle (that matches the script completely), so you could read the Jpn subtitle while watching the film in the original Jpn dialogue.

I have also purchased Whisper of the Heart and it's another beautiful blu-ray remaster. I look forward to the blu-ray release of the rest of the Ghibli library like Kiki's Delivery Service, Totoro, Porco Rosso, Only Yesterday, I Can Hear the Sea, etc.. So far only Nausicaa has been released on blu-ray in the US and it does not have as many language tracks as the Jpn disc. And it will most likely be a while for the other movies after Jpn done releasing them first.
chronos02 (35) on 02, Feb. 2011 22:44 (HKT)
Amazing!
Can't think much about new titles for the reviews, so I'll just put whatever comes to mind...

Anyway, this version of Laputa is a masterpiece, Image quality, animation and sound are just incredible, though as said in other reviews, I'm not an expert on sound matters.
The Box is the same as the Yamadas's one, slightly smaller in thickness than the Nausicaä's BD.

This version does not contain the old Laputa U.S. sound, Ghibli rerecorded the sounds to match the Japanese version.

I'll give it a 5/5, as I don't care much about the old sound. A masterpiece indeed, couldn't expect less from Ghibli and Miyazaki.
watkinzez (32) on 02, Feb. 2011 18:15 (HKT)
Still one of the best
This release, like the other Japanese Ghibli blu-ray releases, is region free and includes the English dub as an extra. Turning off the Japanese subs is possible, but it takes a little work navigating through the menus to do so.

To those who are already familiar with Laputa and are looking to upgrade to Blu-ray, $80US is a tall order, but the packaging and presentation help soften the blow. Gorgeous minimalistic artwork on the cover. The film transfer is fantastic and really shows off the astounding animation at work.

And to those who haven't seen this film before, you're in for a treat. One of Miyazaki's more clear-cut good versus evil adventure stories, but that's not exactly a bad thing. Some of the characters surprise, the action is fast paced and enjoyable, yet the real beauty is when the film stops to admire the majesty of discovery. The Laputa city reveal remains one of the most breathtaking scenes in the Ghibli catalogue.

I guess what I'm trying to say is, watch this film any way you can, but this is clearly the best way to do it for now. ;)