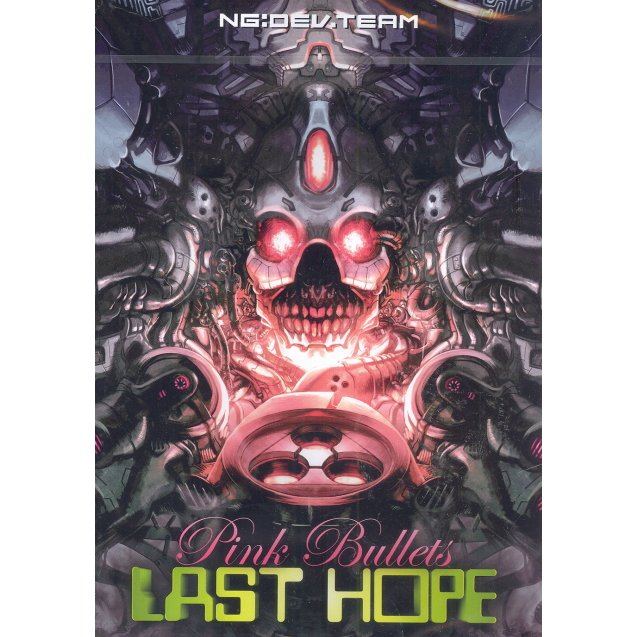 NG:DEV.TEAM
Rated
By Our Customers
Compatible with Dreamcast™ (DC™)
Works on all systems sold worldwide, a correct regional account may be required for online features.
Get informed when this item is in stock by using our Personal Agent from the right.


Click on a thumbnail to see more pictures for Last Hope: Pink Bullets

The evil empire is rushing at light-speed across the galaxies, heading towards Mother Earth. Barely 24 hours ago, they penetrated the last defense line of our galaxy, the Arsion Laser Belt. Millions of innocent people perished in outer space colonies. 70% of our fleet was destroyed during first contact. Our intelligence has now extrapolated their arrival within six days. Conventional weapons cannot stop them. Our last hope is in your hands: The Z-42 Warpstar. Warp into their territories and destroy their leader before they reach Earth.

Last Hope is a shooting game with rotating satellite system and heavy influence by tactical game play. Memorizing level architecture and enemy patterns are necessary for further approaching. The satellite and the beam are the most important components of the game mechanics. You have to learn to deal with both techniques in interaction with the other. It is possible to rotate the protection unit in 360° around the playership and to engage it in 8 gradations. Just press "A" to shoot, "R-Trigger" to rotate clockwise and "L-Trigger" to rotate anticlockwise.

The protection unit mainly serves the defense of enemy plasma projectiles and to fire a stronger plasma shot. There are four difficulty settings: very easy, easy, normal and hard. Less experienced players can enjoy the game on very easy and easy, while experienced players will enjoy the game on normal or challenging it on hard. There are a total of 6 stages. These vary from a sandily space laboratory, a channel fulfilled with muddy water, a idyllic landscape with floating continents, a soul melting enemy factory on fire to an eerily and muggy alien stage.

Last Hope is comparable to classics like R-Type and Gradius. Yet it has it's own visual impressive graphic style and fresh game play. It also features a superb 16-bit digital audio soundtrack, which suits perfectly the games atmosphere.

Exclusive features only available in the Dreamcast™ compatible version:

This is a CD-ROM based product and might not be compatible with some Dreamcast™ consoles manufactured after October 2000.
This software is not officially licensed, designed, manufactured, distributed or endorsed by Sega.

If you are familiar with Last Hope: Pink Bullets, why not let others know?

egy2k (18) on 01, Jul. 2013 09:35 (HKT)
Nicely Done Horizontal Shooter
A very nice alternative to SNK's Last Resort & proof that the Dreamcast can still produce some decent shooters, despite of the system's outdated specifications.
Burnmonkey (154) on 07, Aug. 2012 08:25 (HKT)
Depends what you're looking for
A good Shmup. I wouldn't recommend this game to anyone who just wants this game to play it. It is a decent game, but it's more of a collector's item or part of gaming culture being an independent release for the Dreamcast. If you love the genre or still play your Dreamcast often though. It's a nice thing to have.
Odie (466) on 17, Jul. 2012 09:34 (HKT)
Great Shooter
Last Hope: Pink Bullets is the reason why developers still believe in Dreamcast & make great games for it.
It's one of my favourite consoles (love all of Sega consoles anyway). This game has great graphics & gameplay for a nostalgic shooter.
gogoyubarismooth (289) on 26, Jun. 2012 07:26 (HKT)
Good Game
Good Game
forbeslongden (11) on 10, Feb. 2011 23:43 (HKT)
Last Hope 2009 Dreamcast Release.
I'll be the first to admit, I was very hesitant in buying into Last Hope : Pink Bullets after publicly side swiping Last Hope in my first review here on Play Asia but, I found myself buying into the game when it went cheaper in 2010.

I'm in many ways glad that I did give the game a chance, it is still hard make no mistake. But, it all seems a little fairer this time around - the enemies projectiles are far more clear this time around making the game a great deal more accessible for someone like me with no time to memorize all the patterns of enemy fire. The difficulty has taken a slight south hit also which again, helps newcomers and lazier gamers alike.

Overall to sum up; Last Hope Pink Bullets is perfect for those who missed the first issue, this one being superior in most ways (including the later DVD packaging style) also for many collectors this is worth the entrance fee as the first game I believe is now sold out and exchanging for high amounts of cash. It's perhaps not so great value for owners of the first Last Hope who played the game to death looking for a new experience as this is just an update.

Certainly worth a look.
1 »