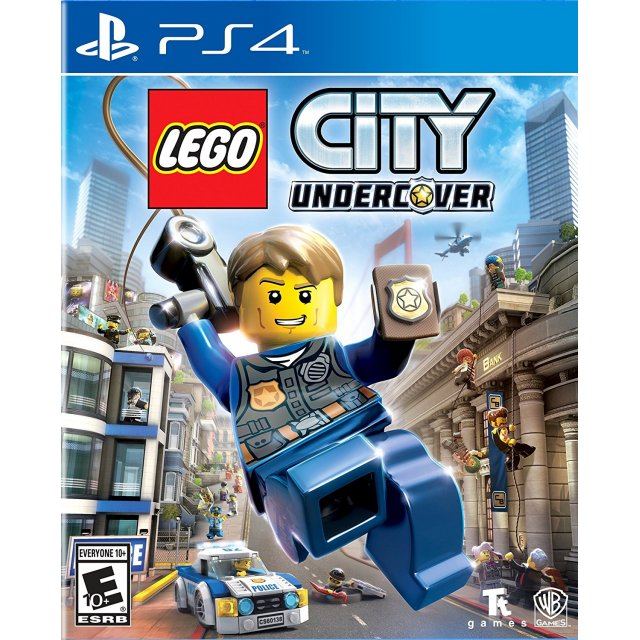 Works on all systems sold worldwide, a correct regional account may be required for online features.
1w Expected stock arrival within 1 week.
US$22.99
Our previous price:US$ 29.99
You save: US$ 7.00( 23% )
Manufacturer
Warner Home Video Games
Rated By Our Customers
Compatible With PlayStation 4™ (PS4™)
Version

Works on all systems sold worldwide, a correct regional account may be required for online features.
1w Expected stock arrival within 1 week
Price
US$22.99
Our previous price:
US$ 29.99
You save:
US$ 7.00( 23% )
Play-Asia.com Return & Refund Policy
Click on a thumbnail to see more pictures for LEGO City Undercover

Join the Chase! This first official trailer for LEGO CITY Undercover introduces Chase McCain, a police officer who goes undercover and dons multiple disguises to hunt down the notorious – and recently escaped – criminal, Rex Fury, to put an end to his city-wide crime wave.

This open-world LEGO adventure allows fans and newcomers to explore the sprawling metropolis that is LEGO® CITY , with more than 20 unique districts to investigate, filled with car thieves to bust, vehicles to navigate, mischievous aliens to capture, hilarious movie references to discover, lost pigs to rescue and of course, hundreds of collectibles. Bringing together witty, original storytelling with signature LEGO humor, this open-world LEGO adventure creates a fun-filled experience for players of all ages.

First of all the controls, graphics and music, I found no problem at all, all things fits in place I feel so comfortable about this game.

The only bad thing about this game there is a loading screen that takes around 3 mins, the good thing this one doenst appear that many times.

So, in this game you are a cop, and you have to stop robbers, your gamepad works as an gps where you can see a map of the city, they tell you were the robbering is taking place so you have to get there, some times de he distance is a little far, in this moments you can ride you cop car, or if it is not close you can ask a pedestrian "to lend his car" or just taking the car from them (gta stile), you can use any vehicule you find parking or used by people. After you get to the crime scene usually the robber get away, so at this time you have to run behind them and when close enough you put the hand cuffs,malso some times they are hiding and you can to use littlr bit puzzle solvind to be able to find them, actually this is fun. The more you advance in the story you get more and more abilities to be able to enter places that were not accesible before.

You can walk the city almoust anywere you want, not anywere yet, because there is a bridge and is closed, I think later becomes open and you get access to more parts of the city, but you can almoust do nothing, you cannot enter most of buildings, and you cannot talk to people who is not realated to the story, if you get close to people they will say what they are thinking, some times is useful hints other times just backstory of lego city. But there are hidden lego blocks, so you can look for them around the city, also if you break small boxes, furniture or small thing like telephone booths you can get small lego piaces. Around the city there are some lego plataforms around the city where you can build a garage with the collected pieces, in here you can summon a car any time, at first you can only summon the cop car, but little by little you can unlock other vehicules.

So this game is not that hard, few puzzles takes little bit of time, but I felt so much fun all the time, a relaxing game, but not that super easy is well balance, I really the recommend this, if you are a wii u collector you should get this version to make yout library bigger or if you like other console buy the one from your favorite console! Now this is available to other consoles!
[This review is based on another version of this product]
pamza_luikham (27) on 12, May. 2017 14:59 (HKT)
Good experience
I liked the premise of the game and also the humour even though sometimes it was a bit pedestrian. The loading time of the game was long but has decreased a bit after a patch so also some of the framerate issues. I had no major problem while playing the game.
Play Asia delivered the game quite early and the customer support were very helpful as I changed the region of my game which was Europe to US as the Europe version of the game had not been received yet.
5 stars mainly because of the customer support by Play Asia otherwise a 3-3.5 game
1 »