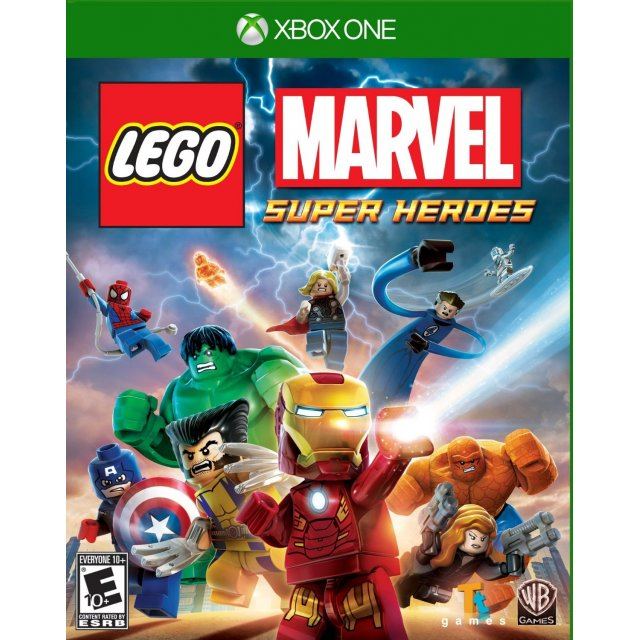 Works on all systems sold worldwide, a correct regional account may be required for online features.
24h In stock, usually ships within 24hrs.
US$19.99
Our previous price:US$ 21.99
You save: US$ 2.00( 9% )
Manufacturer
Warner Home Video Games
24h In stock, usually ships within 24hrs
Price
US$19.99
Our previous price:
US$ 21.99
You save:
US$ 2.00( 9% )
Play-Asia.com Return & Refund Policy
Click on a thumbnail to see more pictures for LEGO Marvel Super Heroes

Marvel Heroes as they assembled:
Excelsior! The roster is full as Ironman, Incredible Hulk, Thor, Spider Man, X-men and almost 150 characters from Marvel all assemble in one action-adventure video game!! Lego Marvel Super Heroes brings almost everything a Marvel fan would want and is Developed by TT Games and published by Warner Bros. Interactive Entertainment.

The Bricks That Can Destroy:
The powerful spacefaring surfboard of the Silver Surfer has been shattered into “Cosmic Bricks”; as they descend into Earth, the heroes mobilize to prevent this incredible power from falling into the wrong hands. Join these iconic heroes in their mission of haste!

Action, Fighting and Collecting:
Experience action packed sequences and brain-busting puzzles as the heroes jump, smash and blast everything around them; like previous games, lego bricks make for great destructible environments. Fight enemies with powers from the Marvel universe and use these powers in the context of the scenarios in game.

If you are familiar with LEGO Marvel Super Heroes, why not let others know?

Imation (464) on 04, Nov. 2016 00:37 (HKT)
no matter the age!
yes, kids or adults can play this game, is very funny with friends
dazh001 (76) on 20, Feb. 2014 11:06 (HKT)
The best Lego game
Not really a fan of the Lego games prior to this but Lego Marvel is decent. There is a lot of content here and if you're a Marvel comic fan, plenty of fan service. Game play is similar to previous Lego titles but the addition of a more open world environment littered with collectibles and side missions adds much needed gameplay variety. Not a bad purchase if you are hankering for something else to play on your X1 or PS4.