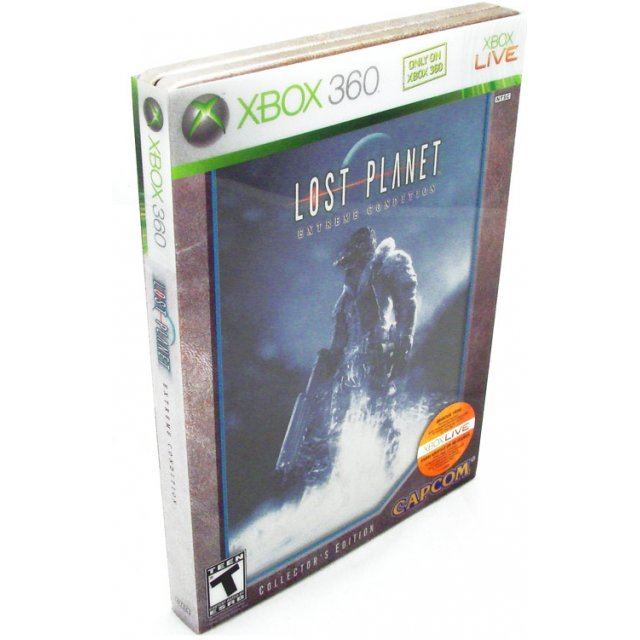 sold Out of print / Out of stock.
Please take note that, once purchased, this item must be paid immediately and cannot be cancelled or returned.
Manufacturer
Capcom
Rated By Our Customers
Compatible With Xbox360™, Xbox One™
Version

Set within the ruthless conditions of a war-torn ice covered planet, humankind struggles for survival as colonization initiatives clash with menacing alien creatures. With a gripping single player campaign and numerous multiplayer modes, Lost Planet for Xbox 360 promises to deliver an epic gaming masterpiece.In Lost Planet, human snow pirates navigate VS (Vital Suits) through unforgiving arctic environments, fighting against the indigenous Akrid creatures for the precious thermal energy they need to survive. For one such pilot named Wayne, death almost seemed imminent until he was fortunately rescued. However, he can only remember a few fragments of his past including the slaying of his father by these enigmatic menaces. Yet under the shroud of ice, a devious plan has been set into motion by the Neo Venus Construction Corporation (NEVEC) who plans to sterilize the worldof all Akrid and snow pirates alike. What really happened to Wayne and how will his destiny become intertwined with NEVEC’s plans?Taking full advantage of Xbox 360’s unprecedented power, Lost Planet will contain an unrivalled level of detail as advanced light sourcing is used to ensure a realistic presentation that enhances every explosion, smoke and particle effect. Enormous world maps unfold as players battle the hostile creatures during blistering weather conditions throughout vast snow fields and deserted cities either on foot or with armed vehicles. Fostering a real-time loading system, players can expect a seamless experience that leaves them completely immersed. Multiplayer modes add to the value of Lost Planet by allowing gamers to partakein intense team battles via Xbox Live® online game service and the opportunity to download additional content. Expanding the Lost Planet world beyond the home, the mobile phone edition will feature a storyline that complements Xbox 360’s version, downloadable content, multiplayer options and original gameplay mechanics.Collector's Edition includes:

If you are familiar with Lost Planet: Extreme Condition (Collector's Edition), why not let others know?

pepemat (37) on 23, May. 2010 10:51 (HKT)
Outstanding!!!!!!
No more time!!good case!!
this game is the best!!
fantastic graffics!!
activewater1 (32) on 06, May. 2010 10:11 (HKT)
amazing game!
always wanted to try this game out and couldn't pass up the collectors edition so cheap on Play Asia and i wasn't disappointed, fast delivery and cheap price for such a excellent game.
one of the more enjoyable shooters ive played and while it may suffer from short game time and at times sloppy controls the other aspects of the game more than make up for it. very satisfying blowing up akrid in this game and never gets dull and the story is good enough to move the game along and keep you playing until the end

definitely a must buy for any shooter fans out there!!
antoniogsolano (2) on 05, Apr. 2010 16:15 (HKT)
I love Playasia, shipments are very fast.
I always wanted to have the collectors edition, I like this game
dkrisnadi (30) on 04, Apr. 2010 22:01 (HKT)
Excellent Game
Great n excellent game at the best bargain you can find on the web!
monchipeters (11) on 01, Apr. 2010 07:44 (HKT)
Great price for a great Collector's Edition
Play-Asia should be congratulated on selling this Collector's Edition. The great thing about this is it is Region-Free, so everyone with a 360 can enjoy it!

On top of that, the steelbook case is solid and has special artwork on and inside the case. The art book may not be hardback but is a much higher quality to most soft cover art books that come with other similar Collector's Editions.

To summarise, this is an amazing find and at Play-Asia's price, you'd be a fool to pass this up.
1 »