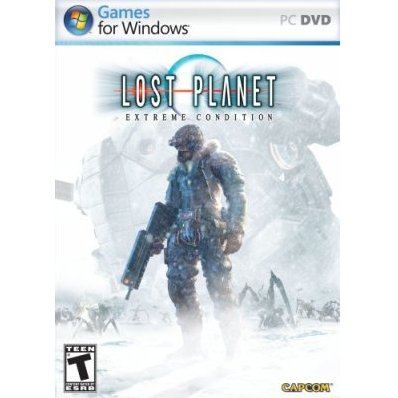 sold Out of print / Out of stock.
Manufacturer
Capcom
Compatible With Windows™ (PC)
Version

Set within the merciless frozen tundra of a hostile planet, humans struggle for survival as conflicts arise between man, the surrounding indigenous creatures and the monstrous beings that have invaded. With a gripping single player campaign and numerous multiplayer modes, Lost Planet for Xbox 360 delivers an intense cinematic gameplay experience.

In Lost Planet, human snow pirates navigate VS (Vital Suits) through hostile ice-covered environments, fighting against the indigenous Akrid creatures for the precious thermal energy they need to survive. For one such pilot named Wayne, death almost seemed imminent until he was fortunately rescued. However, he can only remember a few fragments of his past including the slaying of his father by the monstrous beings. Yet under the veil of ice, a devious plan has been set into motion by the Neo Venus Construction Corporation (NEVEC) who plans to sterilise the world of all Akrid and snow pirates alike. What really happened to Wayne? Who is behind NEVEC and why are they plotting this destructive scheme that could potentially annihilate human kind? Encounter valuable allies and dangerous enemies on Wayne's search for the truth.

Lost Planet is an epic gaming masterpiece combining a gripping single player campaign and intense multiplayer modes with support for up to 16 players. Lost Planet contains sophisticated visuals, with an unmatched level of detail as advanced light sourcing is used to ensure a realistic presentation that enhances every explosion, smoke and particle effect. Enormous world maps unfold as players battle hostile creatures in blistering weather conditions across vast snowfields and blazing volcanic areas either on foot or in armed, robotic Vital Suits.

Capcom will also partner with NVIDIA on their The Way It's Meant To Be Played program to showcase the incredible gaming experience that consumers can expect with a PC equipped with the latest NVIDIA GeForce graphics processors.

No reviews for Lost Planet: Extreme Condition (DVD-ROM) yet.