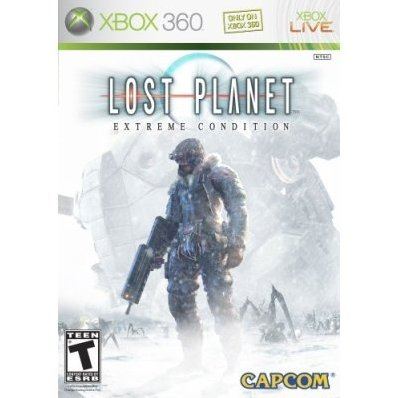 Works on all systems sold worldwide, a correct regional account may be required for online features.
1w Expected stock arrival within 1 week.
US$34.99
Our previous price:US$ 35.99
You save: US$ 1.00( 3% )
Manufacturer
Capcom
Rated By Our Customers
Compatible With Xbox360™, Xbox One™
Version

Works on all systems sold worldwide, a correct regional account may be required for online features.
1w Expected stock arrival within 1 week
Price
US$34.99
Our previous price:
US$ 35.99
You save:
US$ 1.00( 3% )
Play-Asia.com Return & Refund Policy
Trustpilot
Trustpilot

Click on a thumbnail to see more pictures for Lost Planet: Extreme Condition

Set within the ruthless conditions of a war-torn ice covered planet, humankind struggles for survival as colonization initiatives clash with menacing alien creatures. With a gripping single player campaign and numerous multiplayer modes, Lost Planet for Xbox 360 promises to deliver an epic gaming masterpiece.In Lost Planet, human snow pirates navigate VS (Vital Suits) through unforgiving arctic environments, fighting against the indigenous Akrid creatures for the precious thermal energy they need to survive. For one such pilot named Wayne, death almost seemed imminent until he was fortunately rescued. However, he can only remember a few fragments of his past including the slaying of his father by these enigmatic menaces. Yet under the shroud of ice, a devious plan has been set into motion by the Neo Venus Construction Corporation (NEVEC) who plans to sterilize the worldof all Akrid and snow pirates alike. What really happened to Wayne and how will his destiny become intertwined with NEVEC’s plans?Taking full advantage of Xbox 360’s unprecedented power, Lost Planet will contain an unrivalled level of detail as advanced light sourcing is used to ensure a realistic presentation that enhances every explosion, smoke and particle effect. Enormous world maps unfold as players battle the hostile creatures during blistering weather conditions throughout vast snow fields and deserted cities either on foot or with armed vehicles. Fostering a real-time loading system, players can expect a seamless experience that leaves them completely immersed. Multiplayer modes add to the value of Lost Planet by allowing gamers to partakein intense team battles via Xbox Live® online game service and the opportunity to download additional content. Expanding the Lost Planet world beyond the home, the mobile phone edition will feature a storyline that complements Xbox 360’s version, downloadable content, multiplayer options and original gameplay mechanics.

If you are familiar with Lost Planet: Extreme Condition, why not let others know?

PuNiao (365) on 29, Mar. 2007 19:41 (HKT)
Lost Planet: Extreme Condition
Earth is dying. Humans have been frantically searching the universe for a new home, but can only pin their hopes on the hostile planet E.D.N. III. It is no paradise - apart from its perpetually freezing weather, E.D.N. III is also plagued with insect-like Akrid that emerge from beneath its snowy surface. South Korean actor Lee Byung-Hun stars as Wayne, an amnesiac robot pilot who joins an evangelistic group of snow pirates seeking to exterminate these Akrid. To aid him are robot suits with varying functions - one even transform into a snow mobile. Shortly after his quest, Wayne inadvertently discovers a devilish plot conceived by the world government. And so, on top of gigantic alien insects you get to wage war on, ironically, your very own brothers and inventions.

Augmenting the blockbuster premise is an equally ambitious \"survive the environment\" element. This is simulated by a thermal energy meter that trickles down as you waddle in the harsh \"winter wander-land\". Refilling the meter is a matte of defeatinf foes. But to do so, you may need to pilot a robot or otherwise sustain damage, either of which vastly drains thermal energy. So, with stages littered with bounty, the game succeeds at constantly imposing a tension-filled fight or flight dilemma. It is regrettable, then, that I would rather take the flight than fight nine out of 10 times.

Vision-impaired snow pirates stay rooted to the spot as they conspire to take you out. Robots randomly jump and dash about, firing missiles every five seconds as if on cue. The insect-like Akrid alternate between performing vicious sting attacks and waiting patiently for you to shoot them down. Artificial intelligence (AI) design here is shockingly primitive, resulting in underwhelmingly dull moment-to-moment encounters. But, hey, give me a real AK-47 and I could spend an entire afternoon gleefully gunning down beer bottles - fun shooting mechanics could at least downplay the boredom brought about by lousy AI.

That is not the case here. While there are a handful of fascinating futuristic weapons, half the time it is mandatory to rely on firearms that handle like toys. The sole reason to soldier on through single-player is to view the gorgeous cinematic cutscenes. Glossy snow effects and snazzy explosions all round help make the process tolerable. Lost Planet\'s true value, however, lies in its refreshing take on multiplayer shooters. No stupid AI or silly weapon restrictions here. Just you, 15 of your friends, and a bunch of unconventional weapons to play guerilla warfare with. (Try sniping with a rocket or a disc grenade from a mile away). Knock yourselves out, mates!
katt006 (2) on 06, Mar. 2007 06:56 (HKT)
Brilliant Game
I REALLY enjoyed this game! As a female I\'m not usually into mindless shoot-em-ups. But I was quite captivated by the story and characters played out in FMVs between missions.

Don\'t get me wrong though, this game deals a LOT of carnage (both in and out of a mech) and was the first time an Xbox has actually impressed me with graphics. The free flow of gameplay between on-foot fighting, and leaping into a nearby mech (or stealing one off someone else) worked very well and were equally enjoyable.

I\'m a hard one to please with these sorts of games. But I give this one 5/5. Mainly because it\'s not only a good action game, it has a good in-depth storyline and character design too for the genre. I recommend it for anybody.

NOTE: Unless you are an avid game player I recommend playing on EASY! I consider myself a pretty good gamer but I\'m having a bit of trouble on the easiest skill level. Late in the game you\'ll be bringing down some insane bosses. Don\'t say I didn\'t warn you. :D
fishingtackle4eve (2) on 16, Feb. 2007 02:17 (HKT)
whoooa
the games is a very good 1 it is full english the shipping was slower than usual but still faster than waht then say it will 5 days to the uk but over all very good 5/5
carolynvan (1) on 08, Feb. 2007 16:45 (HKT)
review
awsum game and awsum delivery only took 5 days to get to new zealand !
jason.belcher (2) on 22, Jan. 2007 18:01 (HKT)
Review Of This Game
Getting used to this after some hefty Gears of War play is pretty hard - but once you\'re in the \'zone\' this game will rock your world!