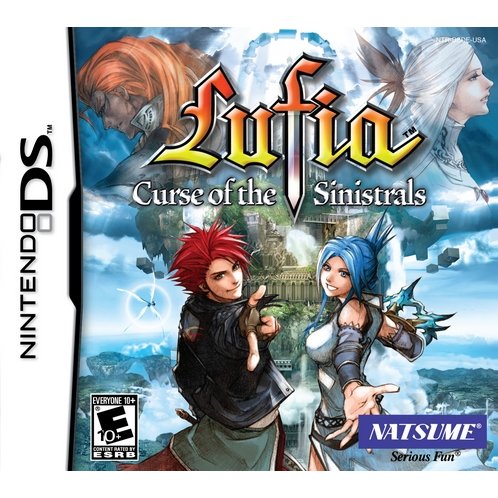 Lufia: Curse of the Sinistrals

Natsume
Rated
By Our Customers
Compatible with Nintendo DS™ (NDS™)

Works on all systems sold worldwide, a correct regional account may be required for online features.
1w Expected stock arrival within 1 week.
US$39.99
Our previous price:US$ 43.99
You save: US$ 4.00( 9% )
Natsume
Rated By Our Customers
Compatible With Nintendo DS™ (NDS™)
Version

Works on all systems sold worldwide, a correct regional account may be required for online features.
1w Expected stock arrival within 1 week
Price
US$39.99
Our previous price:
US$ 43.99
You save:
US$ 4.00( 9% )
Play-Asia.com Return & Refund Policy
Click on a thumbnail to see more pictures for Lufia: Curse of the Sinistrals

The Sinistrals, the four legendary harbingers of doom, are out to resurrect the ultimate evil and bring the world to its knees. It's up to the fiery monster hunter Maxim and his eclectic band of adventurers to put a stop to them once and for all. Their adventures will take them across an expansive world packed with dangerous enemies, powerful items, and diabolical puzzles!

If you are familiar with Lufia: Curse of the Sinistrals, why not let others know?

kopokopu2 (4) on 04, Apr. 2017 04:53 (HKT)
This game could be good or bad depending on whether you played the original or not.
First the music is very good. I don't remember if they left out any tune or not, but they kept the more important ones from Lufia 2, which is was this game was a remake of.

Now if you played Lufia 2, this game will feel kind of bad, cause you are not getting the full story, sure you do get all the important plot points from that game, but everything else that made the game unique was throw out the window.

Now the gameplay, there are enough puzzles to keep you interested, but nothing hard like Lufia 2. The battle system is no longer turn base, but action. This in itself isn't too bad, if you only have 1 character, but you have 6! I don't know but i think if they are going to give you multiple characters they should had adapted the system similar to Secret of Mana, where you control 1 characters and have other characters on field to assist you. Even if their AI could be annoying, I think it is better than having them on reserve. My advise you should just use Maxim, the main guy, cause you really need to use him for the final battle, as he have the ultimate weapon.

Also this remake introduce a grid system called mystic stone. You can collect these stones to customise your characters. This is probably the only nice touch I think was cool for this remake.