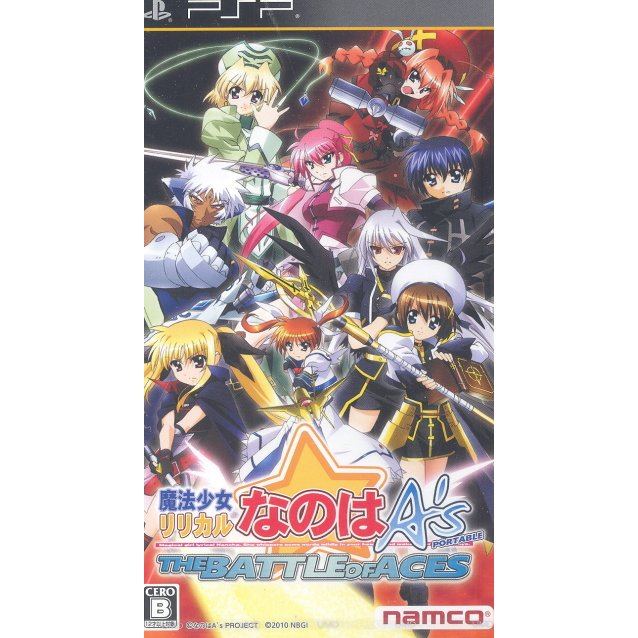 Works on all systems sold worldwide, a correct regional account may be required for online features.
24h In stock, usually ships within 24hrs.
US$34.99
Our previous price:US$ 64.99
You save: US$ 30.00( 46% )
Manufacturer
Bandai Namco Games
Rated By Our Customers
Compatible With Sony PSP™ (PSP™)
Version

Works on all systems sold worldwide, a correct regional account may be required for online features.
24h In stock, usually ships within 24hrs
Price
US$34.99
Our previous price:
US$ 64.99
You save:
US$ 30.00( 46% )
Play-Asia.com Return & Refund Policy
Trustpilot
Trustpilot
Click on a thumbnail to see more pictures for Mahou Shoujo Lyrical Nanoha A's Portable: The Battle of Aces

Bandai Namco Games proves that every one could be a mage and that everyone could become a magical girl. Join Nanoha on her adventures in the Battle of Aces and engage in magical battles. Based on the plot in the second series, each girl gets original storylines written by the story's author Tsuzuki Maki.Besides new plot lines, there are new CG screens and voice clips you can collect along your way. Try out all the girls' different skills and face challenges they met during the series. Long range, short range and air battles require different tactics, make sure your brain spins as fast as you can execute moves.

If you are familiar with Mahou Shoujo Lyrical Nanoha A's Portable: The Battle of Aces, why not let others know?

Tortum (32) on 22, May. 2011 18:39 (HKT)
Just buy it. Seriously.
If you like the Nanoha series you are obliged to get this game. End of story, no questions asked. Even if you don't understand Japanese, just play this game while looking at an English translation somewhere. Seriously, just get it.

The gameplay is simple to pick up and learn (which is good, since all the instructions are in Japanese) and quite fun.

In a nut-shell, pick your favorite magical girl (or woman. Or wolf. Or Chrono) and blast them with a barrage of magical projectiles or just close in and bash them over the head.

Simple and strangely satisfying, the game is immensely fun and quite frankly impossible to describe in words.

The game also offers insights into each character, showing their motivations, dreams and fears in a superbly done story mode. This game is solely responsible for my change in outlook on Reinforce from 'boring emo' to 'freaking hardcore awesome'

At no point at all did I feel like I was punching/blasting someone for some half-baked reason other than the developers thinking it would be cool if X fought Y.

Which is nice for a change, you know.

Seriously, I almost want to demand some kind of OVA based on this game or something. The story is full of good times.

I should also point out that even if you don't understand Japanese, the game is extremely fun and you can more or less guess from the context anyway.


To sum up, game is awesome. Buy it. Even if you don't understand Japanese that is no excuse to not buy it. JUST BUY IT!

Although knowing insufficient Japanese, the menus are simple enough and the difficulty curve is pleasant enough to make this game easy to pick up and play. Not knowing the story is a minor setback, but an imminent viewing of the series will fix that. The game is enjoyable enough to want to continue.
[This review is based on another version of this product]
elflane (34) on 17, Apr. 2010 11:04 (HKT)
All for Fans
Well, I have to say this PSP game design for fans. If you do not know what happened in A's, then the game story would not help you understanding the story
[This review is based on another version of this product]
HonestOtaku (1) on 07, Apr. 2010 11:40 (HKT)
A Real Treat for Nanoha Fans
This game is awesome, with great music and a chance to play the characters that are loved by all Nanoha fans. The effects are enjoyable and although it is rather short for my taste, the game is entertaining nonetheless. The limited edition box set not only brings a great game but also tons of wonderful accessories and a Nanoha figma. This box set is a must for Nanoha fans and I would recommend the game to non-Nanoha fans as well.
1 »