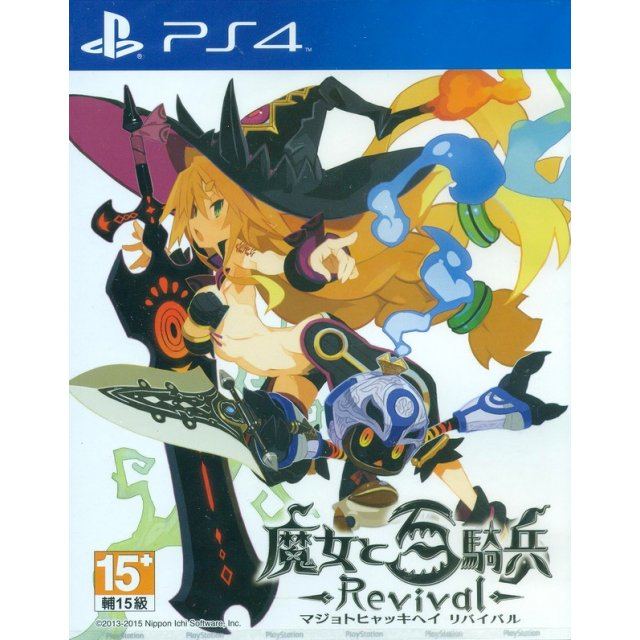 sold Out of print / Out of stock.
Manufacturer
Nippon Ichi Software
Compatible With PlayStation 4™ (PS4™)
Version

An enhanced port edition of Nippon Ichi's foray into the Action RPG genre highly influence by top down isometric titles like Diablo II, Maho To Hyakkihei was originally met with mixed reviews. While the game was lauded for the immensely likeable environment, original music, and memorable cast, notably the witch Metallia and her unforgettable dark persona, reviews for Maho To Hyakkihei suffered due to a game breaking glitch that would delete entire save files.

For those who braved through the many dungeons bravely facing a gamer's worst fear, they were highly rewarded, as they found a game that showed a unique premise, and with this new version exclusively for the PlayStation 4, people can give Maho To Hyakkihei Revival, aka The Witch And The Hundred Knight Revivial - the fair shot it deserves; hopefully this definitive version is the perfect version.

For those new to Maho To Hyakkihei, the story begins in a little forest where an evil forest witch has been in a 100 year deadlock with the genius heroine Metallia, a devilish swamp witch. Neither has been able to win against the other, but upon the discover of a magic script, Metaliia is able to turn the tables by summoning the Hundred Knight, a warrior of legend. Under the behest of his mistress, the Hundred Knight will help Metallia with her goal:the expansion of her domain -but always on his mind are the motives of his mistress - why is Metallia in conflict with other witches? How does she survive in a swamp notorious for it's poisonous and caustic nature?Is Metallia really a witch to respect, or is she one to fear?

Considered to be the first title of Nippon Ichi's roster to be rendered in 3D, gameplay consists of recurring stages where the player controls the Hundred Knight. If particular side-quests are fulfilled, and game universe will expand to an explorable open world. Battle is presented via a top-down view with hack-and-slash elements, with an accessible RPG and equipment system, reminiscent of other Nippon Ichi titles.

For veterans though, the biggest feature is that Metallia is a playable character which addresses a major demand that those who played the previous version had. For the PS4 version, one can also expect the visual sheen that comes with the enhanced port, especially the 60pfs and 1080p resolution, bringing Nippon Ichi's wonderful art style to life!

If you are familiar with Majo to Hyakkihei Revival (Japanese & English), why not let others know?

char_aznable584556 (3) on 29, Mar. 2016 16:05 (HKT)
Great game CRUDE humor!
omg i felt like i was playing a chapter from conkers bad fur day meets disgeae lol it couldn't have gone much better i mean the game starting off for me was a bit slow paced but after the first boss you see why i said it is just like conkers bad fur day.


Graphics:5/10 for this being there first real leap onto the 3D gaming point of view in the many disgeae clone spin offs this game takes the cake in terms of natural pixel development.

Sound/actors: both the sound crew and actors did a great job here they took there time honestly i feel like they just pulled people from other projects and they ended up getting a win with this decision i feel the actors and ambiance couldn't have been done any better 10/10

Replay:HIGH 10/10 as with most disgeae spin offs there is normally alot of replay value in these titles despite the lack of content that normally provided in the form of capturing monsters you essentially are going about in a diablo style game mechanic where you keep upgrading and upgrading ur loots by killing boss type Monsters until ur over all happyness thus that is why i say replay value is high

overall after all things considered ill rate this title a 3 due to the fact there is just alot of things that could have been capitalized on had they just said screw the 3D lol 3D didn't make the last games sell so damn well so why the hell add it now, im pretty sure due to this the 3D sufficated the other resources used for the game causing them to probably fall short on the area's that mattered.
yoloman (130) on 14, Nov. 2015 11:45 (HKT)
Game sure has long story.
Gameplay wise is too easy even for boss fight.Story is too skeptical and funny though i do enjoy it but one thing i hate about it is the play style on the game.control wise is too awkward. Overall is an average game.
[This review is based on another version of this product]
trunions (151) on 29, Sep. 2015 08:49 (HKT)
Great action RPG.
The story is really fun, and the gameplay is solid. The music is really cool. If you are into Diablo like games. Then this is a must have game for you.