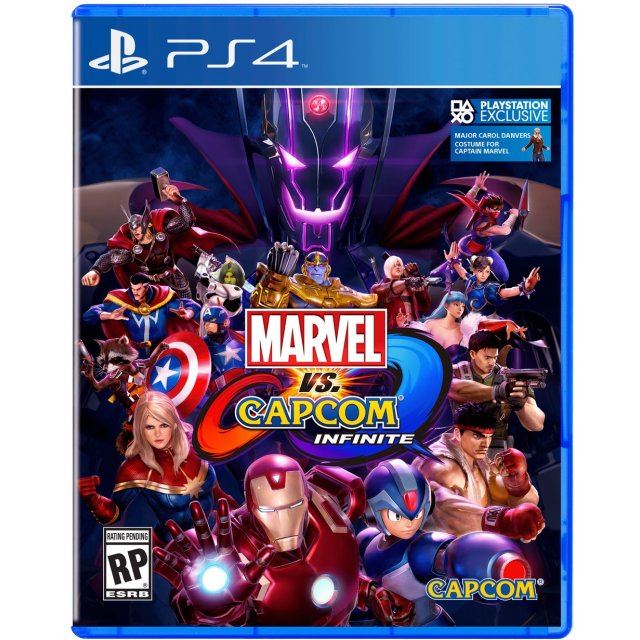 Imagined and created through a shared vision between the two companies, Marvel vs. Capcom: Infinite will feature a variety of exciting and accessible single-player modes and rich multi-player content for new players and longtime fans alike. In addition to single player Arcade, Training and Mission modes, a visually stunning and immersive cinematic Story Mode will put players at the center of both universes as they battle for survival against a sinister new threat. Marvel vs. Capcom: Infinite is being built to highlight a combination of iconic locations and fan favorite characters from both universes, including Captain Marvel and Iron Man from the Marvel side, and Ryu and Mega Man X from Capcom.

If you are familiar with Marvel vs. Capcom: Infinite (Multi-Language), why not let others know?

[This review is based on another version of this product]
Natan (11) on 19, Dec. 2019 23:18 (HKT)
Nice Game
Numerous new characters, modes and mechanics. This is the complete Blazblue
[This review is based on another version of this product]
oldstylehxc (5) on 22, Jul. 2019 15:01 (HKT)
Must have
An awesome fighting game for those who are into the genre, IORI feels a bit different from its original game KoF, but it does the job as visitor heheh. I recommend it!
[This review is based on another version of this product]
strabbycrabby (5) on 21, Jun. 2019 22:35 (HKT)
Best fighting for parties
If you want to spend some quality time with your friends playing fightings but this genre seems too difficult for them, Dragonball Fighterz will be something like a good start. It doesn't mean it's super easy, no. It's just colorful and really crazy looking, plus button smashing really works in this game xD
[This review is based on another version of this product]
strippinheat (20) on 22, Mar. 2019 14:33 (HKT)
Excellent fighter!
This game will surely be overlooked by everyone, but it is an excellent 2D fighter. The character roster is small, but varied. You pick one main character then three assists from a rather large pool, giving you a lot of options in how to customize your play style. Each character and assist has an elemental affinity that you can use to chain together attacks of the same element for bonus damage, or a different element in a rock-paper-scissors style to cause counter hits mid combo for more options. Aside from versus and online play, there is a simple story mode that most of the characters can play through (three console-exclusive characters have no story). It's visually impressive with clean, smooth graphics and flashy animation. The characters have some very famous voice actors and all sound nice. There are a lot of little details I appreciate like the many win poses each character has.
[This review is based on another version of this product]
guanyu4u (2) on 22, Jan. 2019 11:02 (HKT)
Good game for great value
Actually, I bought this as a birthday present to a friend of mine and although I didn't try it, yet, I saw the reviews and they are saying it is the best in the Mecha series. My friend is a Mecha fan so I'm sure he is gonna like it.
1 »