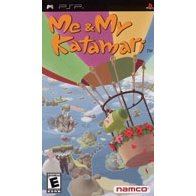 Me and My Katamari

Works on all systems sold worldwide, a correct regional account may be required for online features.
1w Expected stock arrival within 1 week.
US$18.39
Manufacturer
Bandai Entertainment
Rated By Our Customers
1w Expected stock arrival within 1 week
Price
US$18.39
Play-Asia.com Return & Refund Policy
Trustpilot
Trustpilot
Click on a thumbnail to see more pictures for Me and My Katamari

The King is back in all his brilliance to keep the Prince and his cousins continuously rolling as you take the adventure on the road with your PSP. The royal family, taking a break from their celestial construction, find themselves on vacation on their very own sunny island when the Prince finds himself cast with the responsibility of creating islands of katamari for homeless animals. Play as the Prince or any of his returning and new PSP exclusive cousins as you roll up new objects in all new levels. Take on friends in wireless play as you roll up as many objects as possible! Enjoy the fun and quirkiness in an all-new installment for its first ever foray into the handheld world.

If you are familiar with Me and My Katamari, why not let others know?

creafisher (60) on 06, Apr. 2012 00:02 (HKT)
Love the BGM so much !!!
Gameplay is still the same with the console version.
erikqkh (1280) on 26, Jan. 2011 01:09 (HKT)
Handheld version
Not as good as the console version but worth the try :)
[This review is based on another version of this product]
DouglasT (82) on 13, Apr. 2010 04:35 (HKT)
AMAZING GAME ON THE GO
BUY NOW!!!
[This review is based on another version of this product]
ahkina (28) on 19, Apr. 2008 05:47 (HKT)
katamari on the go!
i loved the ps2 version for katamari so i got the psp one and thought its missing some good old features like the quick jump and stuff its still fun. at least its on the go rather than having to sit in front of a tv with a ps2. ^w^ sometimes it lags but it can't be helped over all good! if you're a katamari fan go for it!
shaymus (8) on 09, Jul. 2006 12:36 (HKT)
Me and My Katamari Review
Katamari. A sticky ball. Any objects get rolled over by this ball will get stuck on it.
Trust the Japanese to come up with this weird idea of a game, with weird characters, and
weird settings.
This is my first time playing this game after seeing great reviews from fellow gamers and
online review site. I have never buy and play the PS2 version because it was too weird for
my taste. I mean, c\'mon, how can rolling up objects fun??
Anyway, the Katamari story revolving around King of Cosmos, who always make a blunder,
and his son, the Dashing Prince, who always help to clean up the mess. This time, the Royal
Family is taking a holiday on Earth where they go to the beach to enjoy. It seems that the King
of Cosmos acidentally create huge waves while swimming which wipes out the nearby islands
causing the animals to be homeless. So, the Prince has been instructed to help the animals
by rolling up objects to create islands for them.

The graphic on the PSP is not the best that you have ever seen, but the cartoonish and blocky style
is quite interesting and unique. The objects in the game are not so detailed but you can still make
out what the hell are the things that you rolled up. However, there are still some minor downgrade
in this department. Whenever the katamari get to a certain size, it will \"eat\" up the objects you rolled
and only show some of the larger objects on the katamari. it seems that this was to avoid taxing the
PSP CPU from showing too many objects on the screen at the same time. However, it STILL causes
some slowdown during the transition whcih might bother some people.

Graphic: 7.5/10 (decent graphics but hampered by a little slowdown in some places)

Sound:
Ok, I admit. I am hooked to the \"Na,na......na,na,na,na,na,na,na....\" music. The music is very
addictive in this game. I can\'t help whistling to the tune in my head all days. The bgm selection
is taken from previous Katamari series, with some remixes, but since this is my first Katamari
game, i don;t mind it at all. THe sound effect is all in a fun and cartoonish way. You will hear
people screaming, car honking, the squeaking sound made by Prince\'s feet when he walks
or cow mooing. Fun

Controls:
A lot of people was put off by PSP control which do not have the 2nd analog stick to use.
Namco made changes to the control by assuming the DPAD is the left analog stick and
the face buttons and the right analog stick. THe result? Not a good one. I can only play
this game for about one hour plus due to my thumbs aching. And it is extremely hard to
some of the more advanced movement. I only used the basic commands to move and turn
the katamari and not bothered with the advanced controls. Katamari perfectionists who like
to execute even the smallest turn would find this PSP version, a nightmare to control.

Rolling is fun! Yeah, right, for about 2 -3 hours. Seriously, the game was fun. The menu was not the
usual menu interface type where you choose what to do. Instead you control the Prince who can
roam around in an island, and objects on the island is your menu item. Animals represent the levels
that you can choose to play in, there is a rowing bowl (yes, rice bowl) for you to row to the next islands
and such. The game was full of fun and humour, with the King of Cosmos always dishing out his
weird sense of wisdom. You will feel the satisfaction of rolling up objects especially those huge objects.
I am extremly pleased when I rolled up my country, Petronas Twin Towers which bored the
description of the highest tower in the world with the ability to add up the height by adding the
antenna