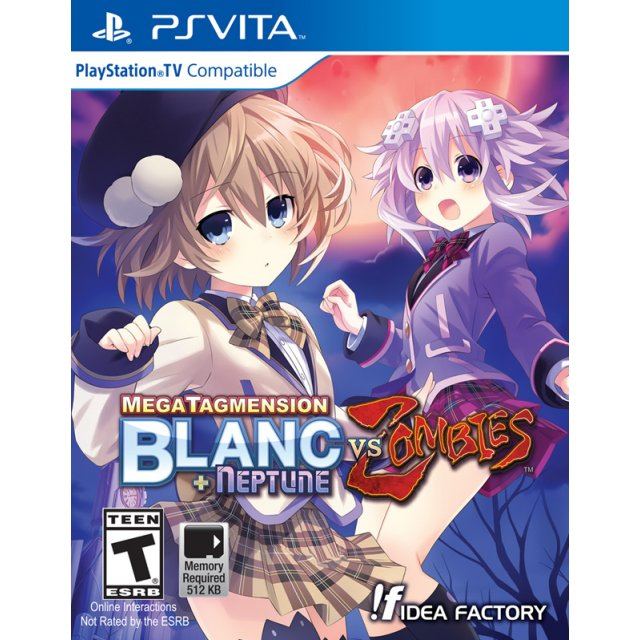 Works on all systems sold worldwide, a correct regional account may be required for online features.
24h In stock, usually ships within 24hrs. (Only 2 left in stock.)
US$39.99
Manufacturer
Idea Factory
Rated By Our Customers
Compatible With PlayStation Vita (PS Vita)
Version

Works on all systems sold worldwide, a correct regional account may be required for online features.
24h In stock, usually ships within 24hrs
(Only 2 left in stock.)
Price
US$39.99
Play-Asia.com Return & Refund Policy
Click on a thumbnail to see more pictures for MegaTagmension Blanc + Neptune VS Zombies

Fight off zombie hordes with friends in the first multiplayer game in the Neptunia series, MegaTagmension Blanc + Neptune VS Zombies for the PlayStation Vita system. It is a sequel to the high intensity hack 'n slash action game Neptunia U.

Set in Gamicademi, Gamindustri's academy for CPUs and CPU candidates, Blanc and friends must film a movie to save their school, fend off zombies, and look cute at the same time. Play with up to three friends in the multiplayer mode or, with two support characters to boost statuses in battle, tag team with another character, including new characters, Tamsoft and Uzume Tennouboshi, and familiar faces, Plutia, Peashy, Dengekiko, and Famitsu, to Nep up some zombies. Additionally, you can stylize characters with accessories like glasses, eye patches, and masks to make sure you look extra cute while slaying zombies.

If you are familiar with MegaTagmension Blanc + Neptune VS Zombies, why not let others know?

marciorp05 (3) on 18, Sep. 2017 12:13 (HKT)
JOgo bom, mas achei meio mediano
Achei o Action Unleashed um pouco melhor, mas esse caso vc goste, tem que abrir os combos de pouco a pouco, ou seja, é bem mais dificil
boothegoon (20) on 21, Jul. 2017 10:11 (HKT)
Decent
Just starting to play the single player. Basically hack & slash still trying to get used to it because all the other hyperdimension games are RPG which I am more familiar with. So just want to give this title a try. The characters interactions are always very cute & fun to watch.
msm197311 (32) on 11, Jun. 2017 21:58 (HKT)
nice hack n slash
a must have if you like the series, its blancs first own game
pauldo (6) on 06, Jun. 2017 11:44 (HKT)
schoolgirls + hyperdimension + zombies = ;)
pretty much all you need for your next vita game purchase.
It's a hack 'n slash similar to the dynasty warriors games but with smaller maps.
There's a plot about making a film to save a school which is interesting and humourous to follow with as you play through the single player game.
There is also an online multiplayer component.
Recommended!
happyfart61 (1) on 30, May. 2017 08:41 (HKT)
fun
really fun game
1 »