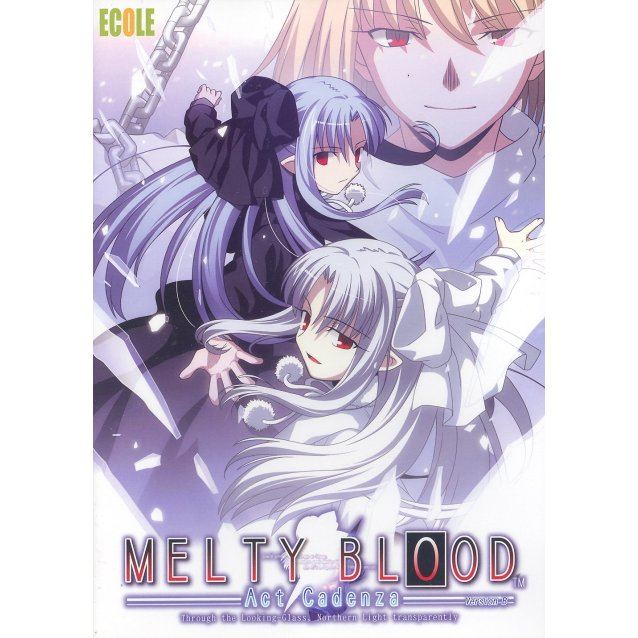 Type-Moon
Rated
By Our Customers
Compatible with Windows™ (PC)

sold Out of print / Out of stock.
Manufacturer
Type-Moon
Rated By Our Customers
Compatible With Windows™ (PC)
Version

Melty Blood Act Cadenza Ver.B is a Windows PC port of the Arcade ver.B2 with new features such as a tag-team mode. Melty Blood makes use of widely used concepts in fighting games such as cancels (cancelling an attack before its animation ends, then beginning another, allowing for more complex and damaging combos) chain combos (normal moves that can be link without the use of cancels) and the use of power bars (called Magic circuits in-game).

Magic circuits serve more purposes than just allowing the execution of special moves. Chain combos are much easier to perform in comparison to other games, and it also brings other interesting features like simultaneous impacts and dash shielding among others. In addition, it brings the original concept of Shielding into gameplay.

If you are familiar with Melty Blood Act Cadenza Ver.B, why not let others know?

The gameplay is solid and very fast phased, and each character attacks are an eye candy.

I'm a fan of Type moon, and this game is among my favorite things from what they've created.

I can't understand much of the Japanese unfortunately - which would be the only slightly annoying thing about the game.

I guess I just have to make the decision to sacrifice game time to learn all the Japanese I need to understand what's going on with the story - but still the fighting is great fun.

Characters are pixelated which is of no concern after you play your first round. A HD version would be mind blowing.

Like all fighting games the story is short and disappointing - fighting games need twists - suspense, for god's sake death for once! and of course things we are all thinking but too shy to say...

Anime games have a long way to go!!!

I would suggest you buy it if you like these kinds of games - amazing gameplay - graphics and the style is totally breathtaking...