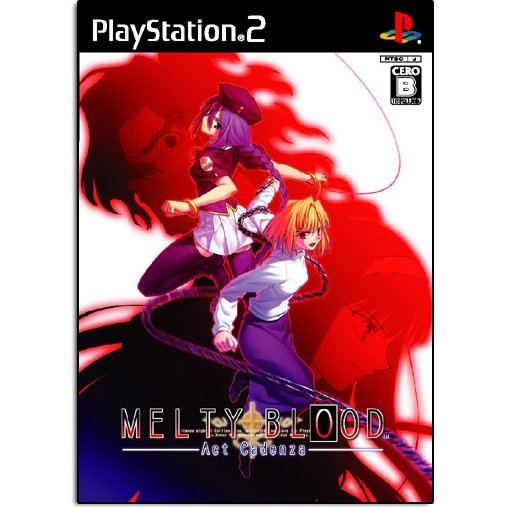 Ecole
Rated
By Our Customers
Compatible with PlayStation 2™ (PS2™)
For JPN/Asian systems only.

Tohno Shiki hears of a new series of murders in Misaki similar to the ones that took place in Tsukihime. Whilst searching for the murderer he meets Sion Eltnam Atlasia who initiates a fight with him, attempting to capture him. After the fight she reveals that her reason for attempting to capture him is to get in contact with the "True Ancestor" (referring to Arcueid) so that she may acquire information on the "cure for vampirism". Shiki then decides to help her with this task.

If you are familiar with Melty Blood: Act Cadenza, why not let others know?

vio-deni (53) on 14, Mar. 2010 15:39 (HKT)
Melty Blood: Act Cadenza
Great 2D Fighting with а hardcore gameplay. Must have for every Type-Moon fan!
mkb (7) on 22, Jul. 2008 02:43 (HKT)
Fantastic 2D Fighter!
I know fans of Fighters, Anime, and Games with Fantasy elements will definitely love this game as much as I do. The characters are all very attractive and have a wide variety. The combat is somewhat tricky at first to get combos down pat but it is VERY fun to learn new combos and characters styles. BUY IT BEFORE IT'S SOLD OUT!
thewhantahndestroyer (4) on 10, Jun. 2008 02:38 (HKT)
?!
I played this for awhile... and it feels and looks really good... for a few minutes.
The cast is not too terrific almost half the characters are copycat sprites with two or three diffrent moves.

This is also a very broken game for a couple of characters have absolutely no chance against others.

Graphically I'm not one to complain, the sprites look good but need to be anti-alaised, the profile art is pretty bad for a fighting game, not that it should matter anyway but it really bothers me.

I feel wrong playing the game, alot of the moves make me feel really really cheap for using them.

I also would like to thank Melty Blood for introducing me to Tsukihime (The visual novel Melty Blood is based on) which I now worship, lol.
1 »