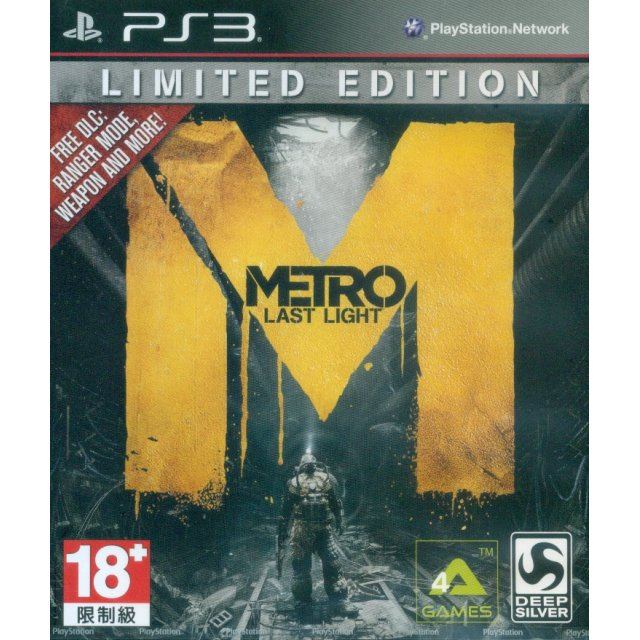 Deep Silver
Rated
By Our Customers
Compatible with PlayStation 3™ (PS3™)

Works on all systems sold worldwide, a correct regional account may be required for online features.
24h In stock, usually ships within 24hrs.
US$18.99
Our previous price:US$ 52.99
You save: US$ 34.00( 64% )
Manufacturer
Deep Silver
Rated By Our Customers
24h In stock, usually ships within 24hrs
Price
US$18.99
Our previous price:
US$ 52.99
You save:
US$ 34.00( 64% )
Play-Asia.com Return & Refund Policy
Trustpilot
Trustpilot
Click on a thumbnail to see more pictures for Metro: Last Light (Limited Edition)

It is the year 2034. Beneath the ruins of post-apocalyptic Moscow, in the tunnels of the Metro, the remnants of mankind are besieged by deadly threats from outside - and within. Mutants stalk the catacombs beneath the desolate surface, and hunt amidst the poisoned skies above. But rather than stand united, the station-cities of the Metro are locked in a struggle for the ultimate power, a doomsday device from the military vaults of D6. A civil war is stirring that could wipe humanity from the face of the earth forever. As Artyom, burdened by guilt but driven by hope, you hold the key to our survival - the last light in our darkest hour...

If you are familiar with Metro: Last Light (Limited Edition), why not let others know?

william.fu (67) on 24, Apr. 2015 18:27 (HKT)
Metro The Last Light
The Story of how the protagonist has certain relation to the alien race is totally new for me...from the moment I saw this on youtube and how the setting took place in apocalyptic world I couldn't resist but to pick up this game. Every bullet is valuable! SERIOUSLY for your survival, and it just adds to the challenge and suspense and desperate attempt to stay alive fighting monsters. You'll get to experience the bleak world and just how to really appreciate Our current world and our lives by looking the people living under the Metro. The game has me wet eyed at times because of watching how disease infected father tries to comfort his daughter knowing that they'll die soon.
GREAT GAME! GREAT SERVICE FROM PLAY-ASIA! Thanks! and Keep it UP!
Migri (29) on 16, Mar. 2015 08:57 (HKT)
A true sequel of a good game
The ambien is so envoving, it has a good story and great controls. The only problem is that iI can't seem to redeem the DLC becase of the region in my psn account.
aleckrav@gmail.com (45) on 17, Apr. 2014 19:50 (HKT)
Very good game!
This is a sequel to the Metro 2033 and the story has been developed in a very interesting way. It's an unusual, meticulously detailed shooter inextricable from its environment – making its refuge in the railways of Moscow all the more apt. The survival and shooting aspects engage with what is considered valuable in the world, and both leave ample room for moments of solace, exploration and concise violence. I read both books and had a great time playing this game!
robert.andrew.ong (184) on 02, Oct. 2013 21:32 (HKT)
just like playing fallout. but different. but still awesome!
just like playing fallout. but different. but still awesome!
pauloredline (169) on 17, Sep. 2013 10:01 (HKT)
Superb!!!!
Great game with excellent graphics and gameplay, I recommend to all
1 »