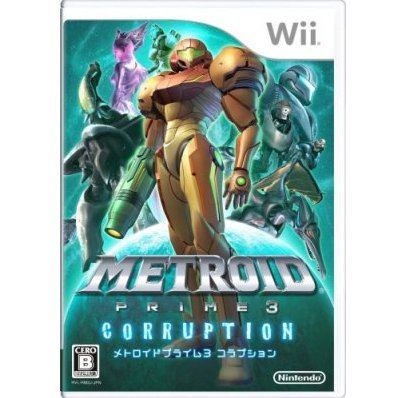 NTSC
24h In stock, usually ships within 24hrs. (Only 1 left in stock.)
US$39.99
Limited time offer - Secure yours now before the offer expires!

If you think you knew what it felt like to be the bounty hunter behind the visor, think again. The Galactic Federation's network computer, Aurora Unit, is suddenly and completely corrupted with something like a virus. The Federation believes Space Pirates may be behind the problem and are soon attacked. Samus and other hunters leap to their defense only to find that the enemy they face is Dark Samus, armed with immense power that no one can withstand.

If you are familiar with Metroid Prime 3: Corruption, why not let others know?

docomogame (540) on 18, Sep. 2010 10:37 (HKT)
Great Sequel
Great Sequel of Metroid Prime Series , best action & shooting game.
[This review is based on another version of this product]
gamescook (35) on 02, May. 2010 10:45 (HKT)
Awkward Controls
I enjoyed the original Metroid Prime, but #3 was just a hassle to wade through. Getting lost, walking into corners, turning too slowly, not easily locking on put a hamper on any fun I could have had. It had good presentation, and it was nice to have dialogue, but that may be counter to the atmosphere for which Metroid games have been known. Maybe if I could play it with a traditional controller, and if enemies dealt more damage, I would like it much more. Still, at least its prequels were great.
[This review is based on another version of this product]
bannakai (2) on 10, Jan. 2009 10:31 (HKT)
Sweet!
This is my first time playing a metroid game and i loved it .. i plan on buying 1 & 2 after seeing how nice it is
.. this is how games should be
great boss battles
great upgrades
great "puzzles"
Buy it its very unlikely u would regret it
[This review is based on another version of this product]
Solty (105) on 15, Nov. 2007 21:10 (HKT)
Not down on the story but
This is my first Metroid Prime game, Samus starts in her space craft, around a huge like fleet, some incoming messages to her craft and a few ticks and jabs on the buttons to answer, manover her ship and get things going, she ends up on a much larger craft

The graphics look great, the game uses the wiimote well, you can turn into a ball with a flick of a button, aiming is decent, the game also gives you a little trial by letting you shoot 4 targets when you step off the craft