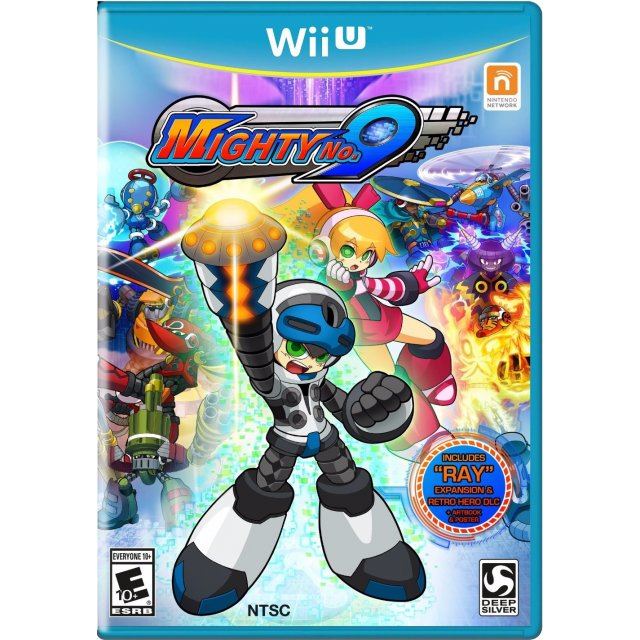 Collections
Deep Silver
Rated
By Our Customers
Compatible with Wii U™ (Wii U™)
For US/Canada systems.


Click on a thumbnail to see more pictures for Mighty No. 9

Androids and other robots of the world has been crashed by a computer virus, and only one is not infected so he must save his race and defeat the villains - he is Mighty No.9! Mighty No. 9 is a classic Japanese side-scrolling action game helmed by Mega Man producer Keiji Inafune that brings back a classic formula transformed with modern tech, fresh mechanics, and fan input into something fresh and amazing!

Take the role of Beck, the 9th android in the line of Mighty Robots, and the only one who’s not infected by the mysterious virus that turns other robots to be frenzied. Run, jump, and shoot projectiles at enemies to acquire both weapons and abilities from foes that they defeat. Beck's body has the ability to transform into different shapes, depending to the specific Mighty Number robot that he defeats. The game features an intro level followed by the eight main stages, which are freely chosen in any order by the player. Beck must face one of the other eight “Mighty Number” in a boss battle at the end of each stage. At the end of the game, a final set of stages are unlocked leading up to the Final Showdown. “Mighty Skills” lets players grant new abilities and ways to buckle down the levels.

If you are familiar with Mighty No. 9, why not let others know?

[This review is based on another version of this product]
1110adrilibra (238) on 06, Oct. 2018 07:39 (HKT)
boring
not that bad because i'm thinking highly on mega man either
jayvgames (13) on 06, Jan. 2018 15:09 (HKT)
Not that bad
A title that isn't that terrible and plays just fine on the Wii U. Mighty No.9 was one of the most hyped up titles that unfortunately, did not deliver on all that it was built up to be and even had a bad marketing campaign for it. Mighty No.9 features a pleasant world where technology is very advanced and there isn't any sort of conflict between other countries and so forth. That is until robots start acting aggressive and hostile. Even our heroes brethren can't control their urge to be baddies. Mighty No.9, or Beck for short, is tasked by his professor and his other professor friend to restore the other Mighty Numbers to their good guy selves and join forces to tackle on the true threat behind of all of these corrupted robots. The game relies heavily on combos and has some small frame rate issues that don't usually take over unless its in certain parts where there is multiples of the infamous "pizza explosions" happening at once. It doesn't freeze the game or make it crash but rather makes it a tad annoying to see. It also is a spiritual successor to the much praised Megaman series and takes on many aspects like the difficult platforming, the ability to absorb the bosses abilities and add them to your own, and a laser beam like megaman. However, this game relies heavily on combos which is performed when you shoot enemies a certain amount of time and dash into them thus absorbing them and gaining points The game runs fine on the Wii U and the load times are ok too. Loading times last about 10 seconds max. Makes me wonder why people complained this version was atrocious. I personally enjoyed the game with it's bright and colorful world along with the difficult platforming, the new abilities to absorb from each boss fight, and some certain characters's personality. Some cheesy jokes are cringe worthy but others are well timed and pretty funny. Especially Avi. However, if you aren't into wanting to hear english dialogue, the audio can be changed to some other languages like french or Japanese. Plus there is subtitles for you to understand what's going on if you choose another language option which is great. Now if only that sort of option would be used for Japanese only import titles so that people who import can understand plots to the games they buy. Anyways, the game isn't as bad as everyone says it is. It just was put on a pedestal and basically let everyone down on all of the hype like No Man's Sky. However, if you come in with no hype and just to play it for some fun, then you'll be pleasantly surprised by this game and I personally would recommend it regardless of port you choose to play it on.
[This review is based on another version of this product]
docomogame (540) on 04, Jun. 2017 23:51 (HKT)
Good : Cheap price
Wait for next title from Inafune
awe.of.she.1 (173) on 19, Oct. 2016 16:41 (HKT)
Get Gunvolt instead
This is a disappointment.
[This review is based on another version of this product]
e_pedraza_g (517) on 19, Jul. 2016 09:10 (HKT)
Could be way better
For all the hype it received, could be better. As it is it's an ok game.