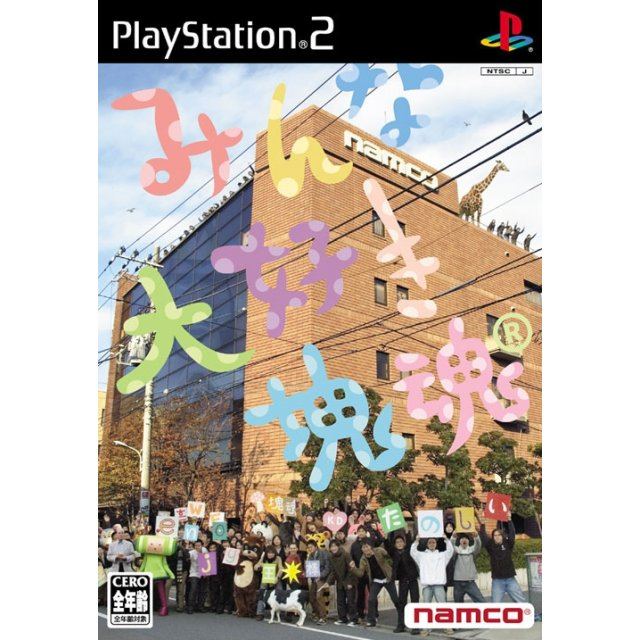 The King and Prince return in the sequel to one of the most unique, simple and addictive games released in 2004 -Katamari Damacy. Minna Daisuki Katamari Damacy, which translates to "Everyone loves Katamary Damacy", has an entirely new and uniquely bizzare story. One day, the Prince of All Cosmos receives a request from a fan. The objective of the game is to have the Prince of All Cosmos answer the fan's request, which will make more fans (stages) appear until the whole game is mobbed with fans. In Minna Daisuki Katamari Damacy's single-player mode, each of the stages has different objectives, such as making the lump as large as possible with a limited number of objects, making the lump larger than a given size, or picking up certain objects on the field.The gameplay and controls remain as the original Katamari Damacy, with the addition of a "torso" present available, so the Prince can wear both headgear and shirts. New levels include Underwater (swim with the fishes to pick up undersea life), Zoo (pick up all the animals you can!), Classroom (pick up school supplies and students!), and Race (where you have to pick up people racing in cars).「塊」を転がして大きくする！！簡単操作はそのまま！基本的には左右のスティック２本のみ。国境も年齢も性別も超えて、誰もがすぐに楽しめるおなじみの「塊魂」第二弾がついに登場！王子（主人公）を操作して「塊」を転がし、ステージに配置された色々な「モノ（野菜や人間等）」を巻き込んで大きくしていきます。最終的には星（数百メートル以上）！？

If you are familiar with Minna Daisuki Katamari Damacy, why not let others know?

The one bad thing though is the way most levels are laid out. The early missions are quite easy and fun. But later on, when you find yourself having to roll up 500m in 17 minutes....and you have to waste precious seconds moving from one city to the next, it tends to get a bit frustrating.

the level design throughout the game is amazing!

loads of settings including... zoo, car race, underwater, school among others!

the gameplay,graphics and camera are just the same as katamari damacy!