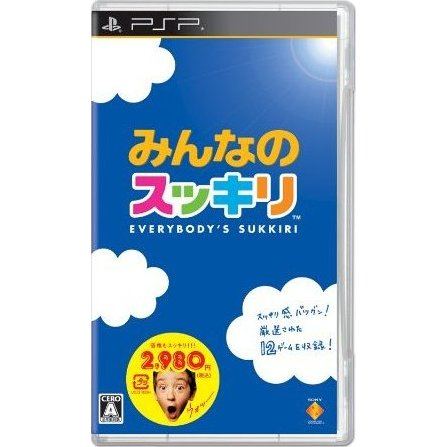 If you are familiar with Minna no Sukkiri, why not let others know?

Originally, I tried to get the "Asia" version, since such versions (compared to the "Japanese" version)
often got an English translation.
Since it was sold out, I bought the Japanese version instead and I gotta say it doesn't affect the fun.
You gotta figure out what some options do, but the games' rules and controls are so easy to get,
you won't miss any important details.

The game starts with some playable mini games first. The rest must be unlocked by collecting coins, which you'll get when you simply play the game and achieve good scores.
If you get 10 coins, you can buy one of the locked games. The game makes sure that you try hard on the already available games, which is not a problem since they are pretty addicting.

The game is well balanced, means that I couldn't find any flaws like unfair game behaviour, that demand more luck than skill.
The controls are smooth and react fast to commands,
which is very important, because a lot of games are based on speed/reaction.

This game was made from the same guys, who created the "Everybody's Golf" series and "Everybody's Tennis" series. So if you are familiar with these games and loved them, you will possibly dig this game's charme as well.
Virtuous Lumox (9) on 17, Apr. 2010 22:51 (HKT)
Who thought vacuuming could be so fun!?
This is by far the best collection of mini games of any game title on any system. I was surprised to see a vacuuming mini game when I looked inside the manual. I was even more surprised when I realized how addicting the vacuuming mini game was. There are 12 different mini games in all. I won't list them all here. I wouldn't want to spoil the surprise. Each mini game has several difficulty settings and variations. Just buy this game. You will not be disappointed.
clement_ng_ (24) on 23, Oct. 2009 01:41 (HKT)
Just for fun
i highlight, when you are stress, this game will help you alot, otherwise it's just a fun game.