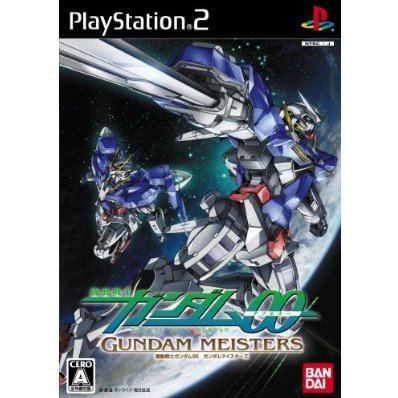 Bandai Namco Games
Rated
By Our Customers
Compatible with PlayStation 2™ (PS2™)
For JPN/Asian systems only.

Revise and relive the plot of the recently ended Gundam series Gundam 00. The anime is turned into the game to give you a feel of what the characters went through during the heated battles.Out of the 4 meisters involved in Celetial Being, choose one of them as your player character and take up the missions that challenges both your reflexes and judgement.For every mission, you can change partners. Get to know the other meisters and see what kind of operations they excel in. Besides the existing plot elements, you can also view original episodes that are written for the game.Combo and battle animations are most beautifully done. You are given a time during these animations to launch combo attacks. Enter as many commands as you possibly can into your mobile suit and do lethal damage to your enemies.

If you are familiar with Mobile Suit Gundam 00: Gundam Meisters, why not let others know?

Not bad, but gets too easy once you understand all the controls and abuse your two button holding special atteck and that special metre once it is maxed from destroying enemy units .

It is a forced 40 mission campaign as a result.
vio-deni (53) on 31, Oct. 2010 08:04 (HKT)
Mobile Suit Gundam 00: Gundam Meisters
A great present for all fans of Gundam 00 and mecha games in general!
hunter12380 (40) on 20, Oct. 2009 12:03 (HKT)
SUPERB GAME
3D ACTION GAME, I'M VERY HAPPY AND HIGH IMPROVEMEN. iRECOMMEDED THIS GAME FOR ALL GUNDAM FAN.
reacter212 (7) on 19, Mar. 2009 00:15 (HKT)
Gundam 00
This is a good game but people thinking its zaft vs alliance it is not but it does play good and the mobile suits look killer and the action movies are a cool break from the action its a timing the and there is a original story line to.The backrounds are ok and it is a fast pace game bosses are challenging Yukes did a good job with this good buy for Gundam fans.
neoblade (1) on 22, Oct. 2008 09:53 (HKT)
Gundam 00: Gundam Meisters
You control a Gundam of your choice in a free roaming 3D world with the ability to lock on and transform at will to re-live the anime in your own living room. The main menu is in English however the rest of the submenus are in Japanese with a bit of flair. You get a choice of jumping straight into the Mission mode where the bulk of the one player game is. A Meister Mode which is like a challenge mode to see how you rank amongst others in Score Attack and other unlockable games. There is also a Gallery, Tutorial and Options screen for you to browse through along with a Versus mode for up to 2 players.

In the Tutorial mode and when you start the Missions mode you can pick between Setsuna (Exia), Lockon Stratos (Dynames), Alleuliah (Kyrios) and Tieria (Virtue). I chose Setsuna for his Exia and was greeted by the ever attractive commander, Sumeragi Lee Noriega and the other female staff. She debriefs you about the tutorial so I start from the basics, starting with the controls.

The Left analogue stick controls your Gundam's motion while the L1 and L2 alters your Z-Axis accordingly. X activates your boost, Triangle a shield and Square to attack. R1 activates the Lock-On system so you can target individual enemies while R2 releases the Lock-On. Circle activates a system called 00 Mode which allows you to chain melee attacks together, useful when surrounded by enemies. You have to press the circle button and 12 directional arrows appear. Red indicates an enemy while a Green allows you to move your Gundam closer to one. The trick here is to use the anologue stick or D-Pad to hit as many Red arrows as possible as fast as you can to form Chains. The longer the chain, the more enemies you can dispatch at a time and no doubt increase your bonus points. As soon as you get a certain number of chains an interactive cut-scene is activated called Action Movie (AM). A short clip of your Gundam is then displayed getting ready for battle and a timing bar is displayed. By timing a button press to hit a moving bar you gain additional hits upon the enemy.

In terms of presentation this game is top notch, even for a Playstation 2 game due to the strong art direction and production values to the soundtrack and voice acting. The 3D engine is suitably smooth with great detail and rendering for the Gundam's themselves but the backgrounds are very plain with little texture mapping. However they are still recognisable from the anime series and often gives you enough room to re-enact the epic battles found in the series. You do have a limited amount of space to manoeuvre in though due to the aging hardware as when you decide to fly around the level to scope it out, you are greeted with a translucent red barrier preventing you to move further. More often than not though this will not hinder your from of attack but is a reminder that this is running on older hardware.

The camera angle as well for some can be very disjointed as it often switches too and fro from a 3rd Person perspective for long range attacks and then a dynamic close up mode for melee attacks. I haven't found this system to be too much of a disturbance because in reality, this is an action game and a few button presses does the job. You could be critical and defend as soon as they attack to prepare a counter but I haven't found myself having the need to much through the game other than on bosses. Which leads us to possibly the largest flaw in the game itself.

It is highly repetitive. Very rarely you will need to pay real attention to your Gundam's elevated height and indeed with only two forms of offensive attack which is shooting from a distance and melee attacks up close, there is not a huge amount of variety depending on the Gundam you choose. You can actually get by most missions by taking out the target from a distance and simply strafing and boosting around if you wanted. Even worse though is the game lends itself to short bursts of gameplay where the use of the 00 Mode would quickly and efficiently get you past many missions.

Essentially the whole game becomes a loop of targeting an enemy, build a limited number of chains and then activating 00 Mode to get as many hits in as possible and move on to the next mission. In fact its essential that you get to grips with 00 Mode because the bosses usually have backup and you need to consistently get very high Chains or even Infinity to get past them. The game then depends near totally on the 00 Mode which is a crying shame. A nice bonus is that the higher the chain, the different type of partner attacks appear, however the reward itself doesn't feel enough for the over-use and dependancy of the system. The other negative thing about the highly dependant 00 Mode is the strain it puts on your eyes. To get high chains you must focus on the screen intently to pick up all the red arrows. The higher the chain, the less arrows appear, of which actually helps the decision making, but you also get less time to pick a direction. If you can imagine doing this quite a few times per mission, the amount of strain it causes isn't fantastic on your eyes or head.

With this in mind, the game is best enjoyed in short bursts because in longer runs the gameplay flaws become ever more apparent. There is less skill really needed for the majority of missions to avoid, counter and block attacks which is a great shame, because in the anime itself you are not always transformed for close combat but a combination of flying, using evasive manouvers, using rear flaires to dispose missiles fired at you and dodging debris in Space, all whilst being in a dogfight.

That lack of sense of being in a dogfight hurts because Gundam 00 becomes a one trick pony. The game is very much geared at the fans because without any prior knowledge of the series itself, the story isn't told well enough as it could have been with cut-scenes and dialogue about the various nations and factions supporting and against the war. Instead just throws you into battle with some cut-scenes about the rival Gundam Pilots which ends up in just trash talk.

To summerise, its great in short bursts for fans of the series or those that enjoy Gundams and Mecha. However it is another opportunity missed yet again for such a large franchise and it doesn't do enough to make it a classic.