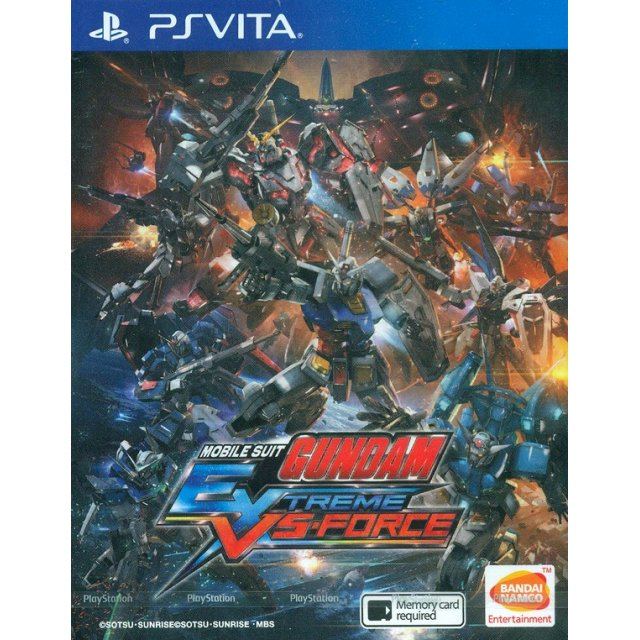 In September, during the Tokyo Game Show 2015, Namco Bandai Entertainment Asia had dropped a neutron bomb annoucement - something we ourselves never sawcoming:

“We are looking forward to bring MOBILE SUIT GUNDAM series fans an English localized version of the game at long last. We are in the midst of localization and hope to bring a good quality product that everyone can enjoy, so do look forward to the release in winter.” said Rainel Tan, General Manager at BANDAI NAMCO Entertainment Asia.

And now, finally, we have the English version open for pre-order, which is exciting as knowing that there will be an actual localized version of everyone's favorite mecha on mecha combat game :)

As for the game itself,Mobile Suit Gundam: Extreme VS Force will feature a number of new playable Mobile Suits as well as pilots. Players can expect the series' familiar Gundam battles, as well as new unit-commanding large-scale battles in Extreme Force Mode. In the larger battles players will be able to assemble a unit of six Mobile Suits and one battleship, setting up three platoons of two Mobile Suits each. Using the new 'Force System,' players can pause the battle and command their troops, designating movement destinations for platoons and providing strategic instructions including: advance, withdraw, gather, and disperse.

'Extreme Force Mode' is the primary mode and starts with a game-original mission, and continues onto missions where players can enjoy Universal Century episodes consisting of various situations from Mobile Suit Gundam up until Mobile Suit Gundam UC. You’ll acquire new Mobile Suits and develop your pilot while completing missions, and organize and operate your own unit while aiming for domination.

If you are familiar with Mobile Suit Gundam: Extreme VS Force (English), why not let others know?

Forza_str (35) on 22, Mar. 2017 19:49 (HKT)
Good game, but has it's flaws
Visual are nice, gameplay very good. But compared to other games of the series, it lacks of content, quite a lot. Check also Gundam Breaker 3 and Super Robot Wars V if you are interested in the Gundam Series
hongjordan (6) on 22, Jan. 2017 00:50 (HKT)
Fun fun fun
Awesome game, great combat, worth it for gundam fans, highly recommended.
LamZeta (4) on 17, Dec. 2016 08:31 (HKT)
Seek Zion!
This game plays exceptionally well on the PSVita there isn't any lag/frame-rate issue compared to Gundam Breaker 3 on the same system.
kouenhasuki (28) on 29, Nov. 2016 20:20 (HKT)
Not as good as Breaker 3 but worth your time
This game here I like, however I didn't fall fully in love with, the reason being is while its faster paced than Breaker 3 it has some strategy elements and given I am not big on that style of game-play it did bring the experience down a little for me. Not that it's not fun and for someone who likes Strategy as well this can be a bonus but I thought it worth noting as other entries in the Extreme Vs series didn't have that element.

Still worth a buy but if you had to pick between Breaker 3 or Extreme Vs Force I would pick Breaker 3 every time
Shiki (17) on 09, Sep. 2016 17:59 (HKT)
More Gundam Action
Already owned the japanese version. The Asia-English version is very nice. English translation here is a big plus. Else, you know what to expect from a gundam game :)
1 »