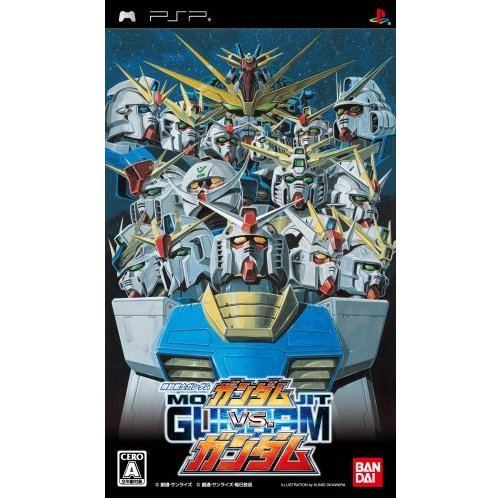 Works on all systems sold worldwide, a correct regional account may be required for online features.
1w Expected stock arrival within 1 week.
US$19.99
Our previous price:US$ 27.90
You save: US$ 7.91( 28% )
Manufacturer
Bandai Namco Games
Rated By Our Customers
1w Expected stock arrival within 1 week
Price
US$19.99
Our previous price:
US$ 27.90
You save:
US$ 7.91( 28% )
Play-Asia.com Return & Refund Policy
Click on a thumbnail to see more pictures for Mobile Suit Gundam: Gundam vs. Gundam

Mobile Suit Gundam: Gundam vs. Gundam is an exhilarating mobile suit action taken from the arcades and converted for the PSP. It contains all the fun and in its existing version and more! Most mobile suits from the franchise are making their appearances in this episode.From the oldest Gundam series to the newest SEED and 00, all series are combined and included in this game. All legendary action scenes and memorable vocals are combined together in this one UMD, so you can revise your Gundam history in one go.Although it provides hours of blood pounding excitement when you play it alone, share a game with your friends to increase the fun by a thousand fold. Through its network game modes, get into a game whenever and wherever with whoever you want.A maximum of 4 people can join in a game at the same time. Play against each other in teams of two, test out your prowesses by battling 3 Gundams on your own or get involved in a battle royale.全機主役!!映像化されたガンダムシリーズ166作品が集結！2001年「機動戦士ガンダム連邦ＶＳ．ジオン」の登場を皮切りに、2006年までに計6作が製作され、アーケードシーンに数々の伝説を打ち立てた機動戦士ガンダム「VS.」シリーズ。その最新作「機動戦士ガンダムガンダムＶＳ．ガンダム」がプレイステーション・ポータブルで登場！これまでに映像化されたガンダムシリーズ16作品から多数の機体が登場するぞ！また、各ステージではそれぞれのガンダムの主題歌やテーマ曲がボーカル入りで流れる！ガンダムの世界に浸りきってプレイしよう！

If you are familiar with Mobile Suit Gundam: Gundam vs. Gundam, why not let others know?

This is not a video game. This is a tribute to 30 years of Gundam. Get it if you are a true fan!
athrun888 (8) on 24, Oct. 2009 23:17 (HKT)
Brilliant game
I recently got a psp and got this game, I was at first hesitant since some of the older games got released in english and didn't go down to well, this one is different, it's very well done, the music is fantastic and included some of my favourite tracks, the graphics are great and really clear, and last but not least the gameplay is superb.
I would highly recommend this game to any gundam fan and if someone's after a good action game I'd also recommend this as well.
clement_ng_ (24) on 03, Sep. 2009 18:10 (HKT)
okok
game is fun, but after you finish the game, there is nothing you do, just keep it in your store.
Flit (116) on 18, Dec. 2008 15:31 (HKT)
Best Gundam game of 2008
30 years of Gundam nostalgia packed onto a UMD. If you are a fan of any Gundam Series, this game is a must own. Lots of unlockable mobile suits, art and music. Best of all, this game has an install to make load times way faster than most PSP games. A fantastic addition to any gundam or PSP owner looking for some hot robot on robot action!