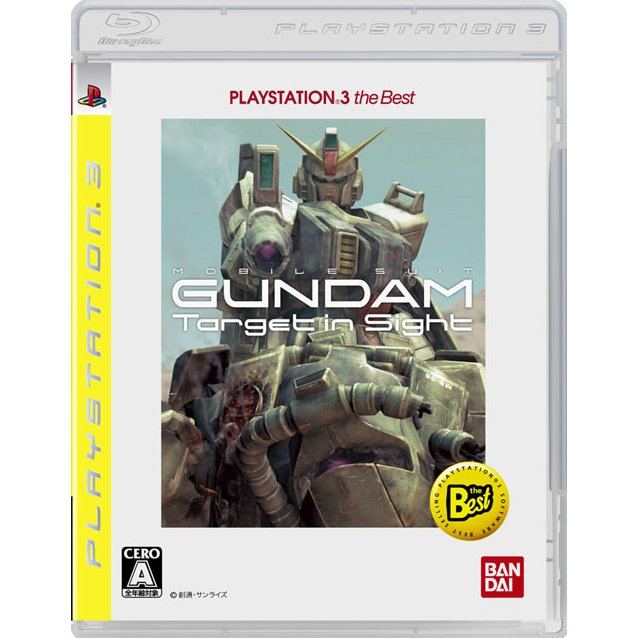 Works on all systems sold worldwide, a correct regional account may be required for online features.
1w Expected stock arrival within 1 week.
US$53.99
Lunar New Year Sale
Limited time offer - Secure yours now before the offer expires!
Our previous price:US$ 59.99
You save: US$ 6.00( 10% )
Manufacturer
Bandai Entertainment
Rated By Our Customers
Compatible With PlayStation 3™ (PS3™)
Version

Works on all systems sold worldwide, a correct regional account may be required for online features.
1w Expected stock arrival within 1 week
Price
US$53.99
Lunar New Year SaleLimited time offer - Secure yours now before the offer expires!
Our previous price:
US$ 59.99
You save:
US$ 6.00( 10% )
Play-Asia.com Return & Refund Policy
Trustpilot
Trustpilot
Click on a thumbnail to see more pictures for Mobile Suit Gundam: Target in Sight (PlayStation3 the Best Reprint)

Nine months have passed since Zeon forces invaded the Earth. At the brink of annihilation, the Earth Federation Forces are mobilizing to launch a massive counter assault against the occupying forces. Make your choice to either defend or invade the Earth! Powered by the PLAYSTATION®3 computer entertainment system, Mobile Suit Gundam: CROSSFIRE throws you into the midst of futuristic war zones brought to life in ultra realistic graphics. The call for arms has been made! Form your own mobile assault force, strategize their next moves and battle with them side by side while you command them to triumph. Master your Mobile Suits. Become the ultimate weapons of war.

If you are familiar with Mobile Suit Gundam: Target in Sight (PlayStation3 the Best Reprint), why not let others know?

[This review is based on another version of this product]
RealPlayer (59) on 06, Jul. 2012 16:21 (HKT)
Great Gundam Game.
Graphics looks really good. The only downside it's the movement of the MS is a bit slow.
edwinflaga (40) on 25, Mar. 2011 23:35 (HKT)
Solid
This game presents a rather realistic control of MS - heavy & sluggish. While the graphics are not top notch, the MS is again given a realistic looks - combat damage and dirt here and there. The camera control though, feels a bit slow and hard to control.

The player plays as a mercenary team leader, where you request additional pilots and MS.
The setback of the game is that it is highly restrictive - you cannot modify controls, MS upgrades are based on stats and category (weapons, atk, def, etc) unlike Battlefield Record 0081 where we can modify what weapon to bring and what parts to add. Beside MS skirmishes, player can call in arti support, etc.

Another good thing about this game though, is that it provide english and japanese subs and dubs.

To sum it up, while not being a top notch game, it is still a solid game worthy to play. Though the story telling is a bit weak and those who are not familiar with early UC history might have difficulty understanding what is happening.
mjcwells (22) on 22, Jan. 2011 16:48 (HKT)
Good Game
Good game graphics are excellent the Gundams look like the real. The controls are a little sluggish, they tryed to make the gundams fill more real by making them slow but they are a little to slow. Apart from that it is real enjoyable to play a must for any gundam fan.
anu.blitz (177) on 21, Dec. 2010 20:20 (HKT)
Great!!!
Gundam collector bunsai bunsai.
Diz-san (18) on 13, Nov. 2010 06:18 (HKT)
Awesome Gundam Simulator
True its not Gundam Vs. Gundam Next Plus, but thats an arcade Gundam game this is a Simulation its suposed to feel like they are slow huge robots.

As the game progresses you gain access to purchase more agile units.

All the Mobile Suits look awesome, with a very "real" life-like style.

In the missions strategy is very important, you have to choose the right Mobile Suit for it or else you're toasted.