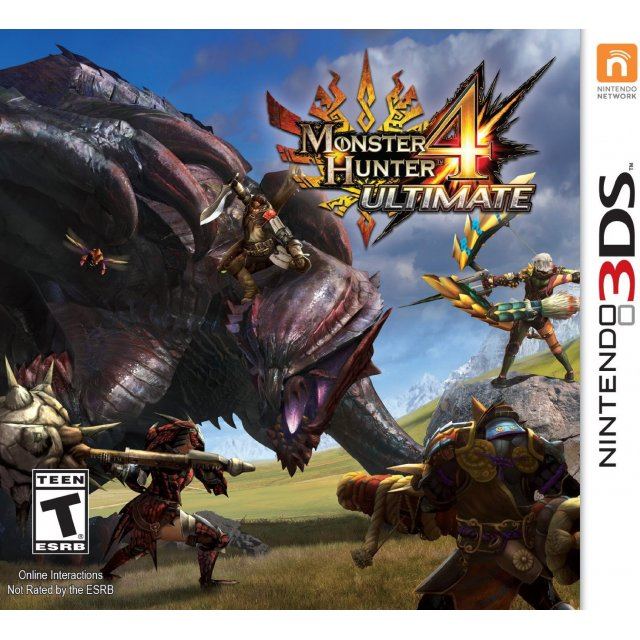 OneMonster Hunter 4G's many improvements is the simple addition of MOREmonsters - adding 8 new large monsters to the roster: 7 of them being subspecies of existing monsters and 1 being a flying Wyvern. The total monster tally, including these additions, is 88 total monsters in the game: 22 small monsters and 66 large ones.Expect to see many of the biggest and baddest monsters returning to the series like Apceros, Diablos, and Hermitaur to name a few!

Capcom has been collaborating with what seems like most of the Japanese gaming industry to add some very famous characters to the game!SEGA will be lendingSonicto4G,givingyour felyne companion a full makeover in blue hedgehog attire - including a one-handed blade based off Sonic’s weapon fromSonic and the Black Knight. You can also show off your love for Green Hill Zone with a special guild card for you and your companion to pose for and pass out using Streetpass.

Legend of Zelda's Link will be showing off hisoutfit fromSkyward Sword, including his Master Sword and Hyrule Shield, which will also be available as equipment. There is no restrictions when it comes to mixing and matching, so a Link with classic Monster Hunter weapons will be a must for us.

Even characters from the belovedAnimal Crossingwill be making an appearanceby bringing in everyone's favorite mayoral aide, Isabella, as well as Mr. Resetti as Felyne costumes. From the video footage there is potential for equal parts cute and scary!

We will also begettinga special Hunting Horn weapon themed after Bandai Namco'sTaiko Drum Masterseries.Please do note that the exact release date and availability ofall the special DLC is unknown, especially for non-JPN versions. Capcom have assured fans that they will be releasing DLC on a regular basis.

And just most recently announced: the animeSeven Deadly Sinswill be lending the look of Medliodas'Dragon Handle weaponto the Sword and Shield weapon ingame, which can be obtained by completing a collaboration/collection quest.

If you are familiar with Monster Hunter 4 Ultimate, why not let others know?

Eldariooon (90) on 09, Mar. 2018 19:45 (HKT)
Monster Hunter 4 Ultimate does more than to simply carry on the tradition of deep, challenging gameplay that Capcom's series has become known for over the last 10 years.
Take off on an epic journey, traversing a vast world hunting larger than life beasts as you look for the source of a mysterious virus. Travel with a caravan of fellow hunters and merchants as you make your way across multiple locations, each with its own unique look and feel.
[This review is based on another version of this product]
kanwakyuudai (4) on 19, Oct. 2015 13:53 (HKT)
Hunt with your friends!
Monster hunter is hard for beginners. However, when you familiar this game you'll enjoy it.
Shikja (12) on 03, Sep. 2015 05:30 (HKT)
It's amazing
Thanks
[This review is based on another version of this product]
Mocco (3) on 08, May. 2015 17:26 (HKT)
No title
If you have played other MH games before, 4G will not disappoint. It is quite unique because it's the first time I've encountered an MH game with multiple villages and an actual story mode with characters and cutscenes.
For a regular 3DS, it took a bit to get used to the touch-screen analog which was to act as the right-side analog for turning the game camera. Otherwise, screen felt a little narrow compared to PSP experience but it's not too bad, very nice game as usual.
alanpprez (1) on 06, May. 2015 03:40 (HKT)
No title
Compre un 3ds solo par seguir jugndo estos juegos
worth it!
Excelente juego. :)
1 »