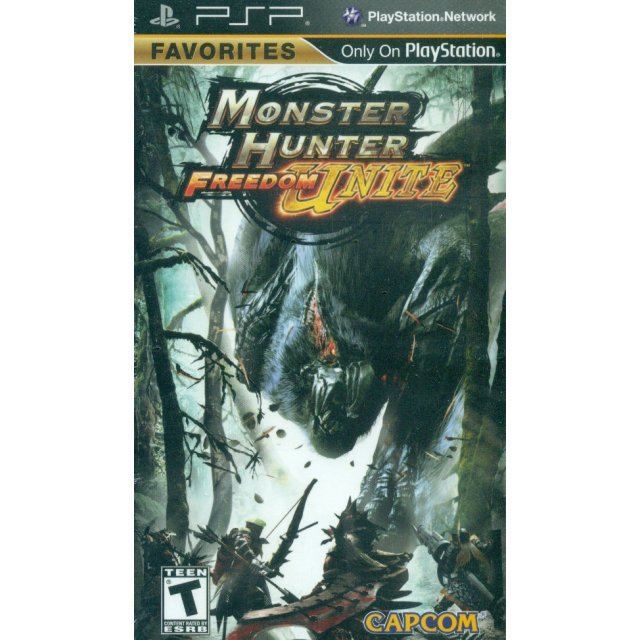 Japan’s most successful PSP title, Monster Hunter Portable 2G, is heading to Europe this coming Spring. Renamed Monster Hunter Freedom Unite, this latest installment in the epic Monster Hunter series delivers over 500 hours of gameplay spanning some 400 missions. Add in previously unreleased monsters, weapons and missions and you have the biggest Monster Hunter game to date.Using the Ad-Hoc connection players can adventure with up to three friends for a savaging multiplayer hunting party. From devising the strategy to executing the attack, players will need to work together in order to hunt down the ferocious beasts and progress through the wide range of quests on offer. Players will be rewarded for their use of deep fighting combat systems, encouraging them to seek out the more experienced hunters and team up in order to learn from their experience.Even in single player mode Hunters won’t be alone thanks to the introduction of the new AI Felyne feature. Accompanying players on quests your furry ally will helping them battle monsters and gather extra resources.

Professor Layton and the Miracle Mask
US$ 32.99

If you are familiar with Monster Hunter Freedom Unite (Favorites), why not let others know?

athzem (105) on 15, Mar. 2016 02:24 (HKT)
a great collection for MH fan
This is the hardest MH game I have ever played and still challenging every time I play. As a MH fan, I think I should keep one copy as a part of my game collection and bought it. Every MH fan should do the same.
erikcls (60) on 26, Jun. 2013 10:32 (HKT)
Awesome
My 1st foray into the Monster Hunter universe and it's amazing. To add to it, it was offered at a discounted price. What a steal. Do get it if you want a taste of the MH franchise.
[This review is based on another version of this product]
jhabeeb (22) on 07, Jun. 2013 09:54 (HKT)
best ever
a fan must get
[This review is based on another version of this product]
kmmeichsner (2) on 09, Jun. 2011 14:45 (HKT)
Best Game
If played the game for a time now and it's al lot of fun
if you know the serie of bleach and your a big fan you must buy and play this game it's so funny and cool
[This review is based on another version of this product]
Jamaican (1) on 03, May. 2011 03:49 (HKT)
I See Why This Game Is So Popular.
This game is great and very addicting. Is has the complete recipe as to why a game would succeed. The music is great, there is plenty of maps on which to quest on, let me forget the sheer number of weapons, armor, and items that the game possesses. This is a game tailored to the player in every way as it can be played in short burst or in long epic endeavors.

I must say that capcom has had come up with an excellent series in Monster Hunter and this sediment is echoed by millions of players. Monster Hunter Portable 2nd G is truly a first class game that provides endless amounts of game play. I recommend this game to anybody even remotely interested in video games.
1 »