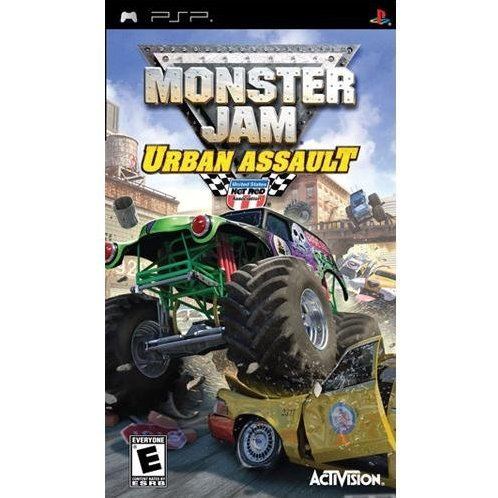 Monster truck action has broken past the stadium barriers - drivers will now be able to wreak havoc on city streets around the world in Monster Jam: Urban Assault. Taking Monster Jam monster trucks onto the streets and other urban settings and being rewarded for the scale of the damage and destruction is one of the new key features of Urban Assault. Feel the crunch of twisting metal underneath as you drive legendary and world famous monster truck favorites like Grave Digger, Maximum Destruction, Monster Mutt, El Toro Loco, Captain's Curse, and Blue Thunder, or select from newer stars on the Monster Jam tour like Stone Crusher, Backwards Bob and Spitfire Monster Truck. Your goal is to demolish every vehicle you see. For purists, Monster Jam: Urban Assault still offers stadium racing and stadium freestyle competitions with gameplay much improved over the original game. Mini games have also been added, including ones brand new to the franchise like Monster Jump, Truck Trickster, Skee Ball and Air Strike.

If you are familiar with Monster Jam: Urban Assault, why not let others know?