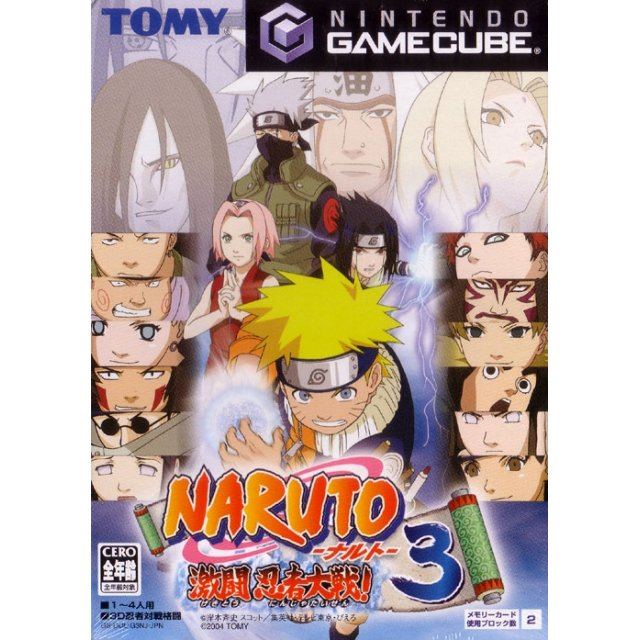 Tomy
Rated
By Our Customers
Compatible with GameCube™ (GC)
For JPN/Asian systems, use Freeloader for other.

The Naruto craze continues with Tomy's Naruto: Gekitou Ninja Taisen 3. The second game introduced four player support, which made Naruto 2 not only one of the best fighters on the Gamecube™, but also a party game. This time around you'll be able to maneuver a full team of three ninjas for 3 on 3 combat. Three on three battles will allow players to use an all new team super move.Naruto: Gekitou Ninja Taisen 3 features at least 25 playable characters. Returning characters include: Naruto, Sasuke, Kakashi, Sakura, Garra, Iruka, Zabuza, Haku, Shikamaru, Kiba, Ino, Hinata, Neji and Lee. New characters include: Shino, Ten-Ten, Jiraya, Tsunade, The Third Hokage, and Tsunade. Another change to the fighting system is that characters with "transformations" can do them during battle. This means you can switch from Kakashi to Sharingan Kakashi or from Garra to transformed Garra without having to switch characters. Tomy has also added two super moves per character to change the gameplay.This game is something for fighting fans and Naruto fans to get excited about!

From TV Animation One Piece: Grand Battle! Combat Rush
US$ 24.99

If you are familiar with Naruto: Gekitou Ninja Taisen 3, why not let others know?