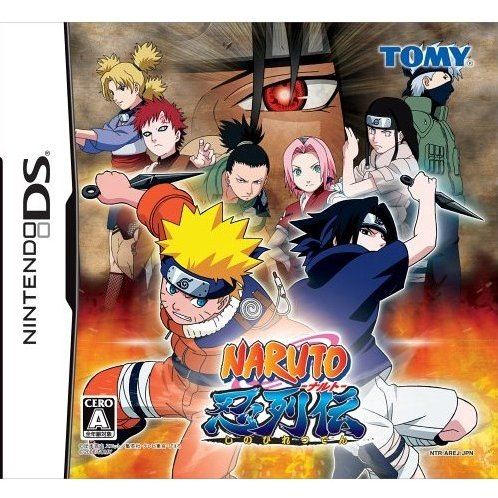 TakaraTomy
Rated
By Our Customers
Compatible with Nintendo DS™ (NDS™)

Great!!!
I Got the game and its Really fun!
The thing up there is wrong there are 13 characters!

Naruto: Shinobi Retsuden is a 3D fighting game for Nintendo DS™, based on the popular anime series. The game has been developed by the makers of the Naruto Gamecub™ series Naruto: Gekitou Ninja Taisen (Naruto Clash of Ninja outside of Japan).Confirmed characters in this game include Naruto Uzumaki, Sasuke Uchiha, Sakura Haruno, Hatake Kakashi, Rock Lee and Neji Hyuga and more. Naruto: Shinobi Retsuden supports Wi-Fi battles.

If you are familiar with Naruto: Shinobi Retsuden, why not let others know?

[This review is based on another version of this product]
kkentb (165) on 10, Apr. 2012 11:12 (HKT)
fantastic
great narutogame in nintendo
xictor (37) on 05, Nov. 2009 02:16 (HKT)
Great Naruto game
excellent first Naruto fighting game 3d. Great gameplay and good speed in battle. Recommended for most fans.
[This review is based on another version of this product]
Hidan (5) on 12, Apr. 2009 02:34 (HKT)
ninja destiny 2 (shippuden) is confirmed!
This was a good start for a naruto DS game, you get 13+ characters including Orichimaru, Jiraya, and Tsunade! I'd give it an 8.4 for good graphics, better and faster because of the U.S. with a little juice added to the game play. But I heard that TOMY is making an ninja destiny 2 and I think that they would make it an heck of a lot better with an longer adventure mode (including the sasuke retrival arc. to the shippuden arc.). I would want them to add more characters, like the europeon version did, with Asuma, Kenuri, Ten Ten, Kiba, Ino, Hinata, Kankuro, Shino, choji, the sound five (added for the first time), the five hokages, Iruka, granny chiyo, old sasori, also 2 attacks for each character, a tag team mode would also be incredible! I just want TOMY to make a bigger, and better game next time....
[This review is based on another version of this product]
karuchira (1) on 20, May. 2008 08:09 (HKT)
No title
I pretty much breezed through story mode,so I gave it 4 stars instead of 5.There are 16 playable characters.
Naruto,Sakura,Sasuke(chunin exam outfit),Kakashi,Lee, Neji, Gaara, Temari, Gai, Tsunade, Jiriaya, Orochimaru, Itachi,Kyuubi Naruto, and CS2 Sasuke are the playable characters.
gaara1394 (5) on 30, Mar. 2008 23:29 (HKT)
well....
It was fun for some time, but than it got EXTEAMLY boring, the graphics DO NOT have naruto game standards, and i think it was a waste of money, i wouldnt recommened this game to anyone, sorry
1 »