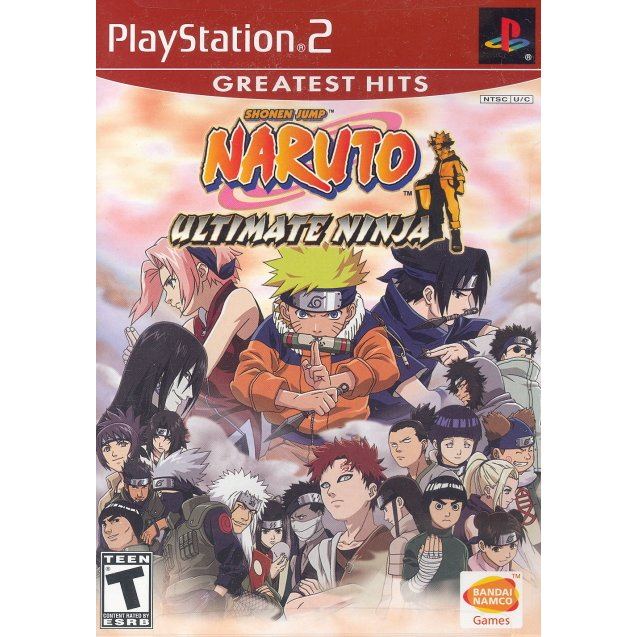 Bandai Entertainment
Rated
By Our Customers
Compatible with PlayStation 2™ (PS2™)
For US/Canada systems.

Experience the world of Naruto as you never have before. Join Naruto and his friends on their Ninja Academy quests as they battle the best in the land. Perfect your ninja skills to earn money and unlock tons of bonus content.Do you have what it takes to become the ultimate ninja?

If you are familiar with Naruto: Ultimate Ninja (Greatest Hits), why not let others know?

[This review is based on another version of this product]
SSJ_Sonikku (28) on 15, May. 2011 02:19 (HKT)
Decent start for one of the best Naruto fighting game series.
The game covers the beginning of the series up to the first half of the Chunin Exam arc. Many of the series conventions etc are started here. Not the best in the series, but this is decent game.
thiromi (2) on 13, Dec. 2010 02:37 (HKT)
Good
the game is nice! but the english voices are horrible! I prefer the japanese ones.
uzumakidattebayo (13) on 14, Feb. 2007 08:21 (HKT)
Could be better...
The graphics are kinda....dull and missing stuff. Since this is the american can\'t really get (unless you have the japanese PS2 or an importer or a modchip) it. I have a japanese PS2 and an english one. I got this one before I got the Japanese Ps2, that was when the day this game came out, when I got the game. If you have an importer then go for Naruto: Narutimate 2 or Narutimate 3 (the third is better though, best out of all and the 4th is coming out). The only thing to me that is good about this game is the amount of characters, pretty good for the american Naruto choice of characters. The specials are okay, I like Sasuke\'s the most.
[This review is based on another version of this product]
edwardelric1fan (11) on 16, Jan. 2007 04:24 (HKT)
Great but got boring
I bought this one and I loved it but after awhile it got more and more boring to play. The gameplay isn\'t that great and there are lots of glitches. But while your playing before having it for a long time, you\'ll love it.
[This review is based on another version of this product]
Anonymous on 11, Jan. 2007 10:42 (HKT)
No title
its an awsome game w/ great gameplay graphics, but they could have put in more characters (on my opinion).
1 »