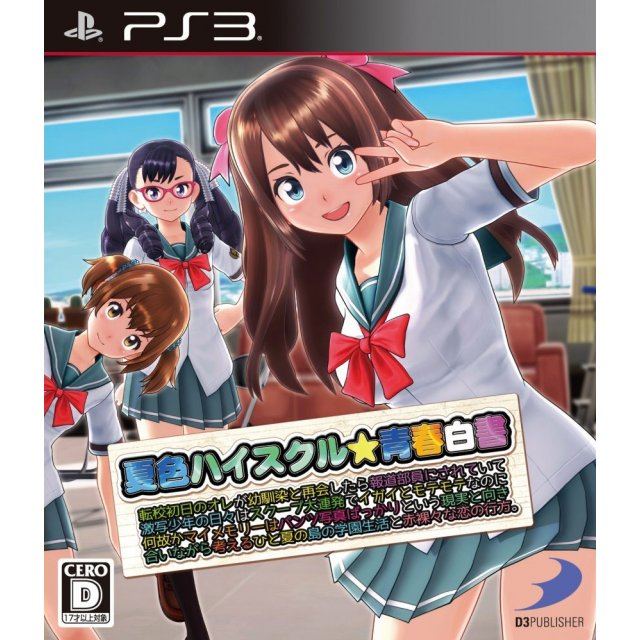 Works on all systems sold worldwide, a correct regional account may be required for online features.
24h In stock, usually ships within 24hrs. (Only 1 left in stock.)
US$59.99
Limited time offer - Secure yours now before the offer expires!

Works on all systems sold worldwide, a correct regional account may be required for online features.
24h In stock, usually ships within 24hrs
(Only 1 left in stock.)
Price
US$59.99
Our previous price:
US$ 63.99
You save:
US$ 4.00( 6% )
Play-Asia.com Return & Refund Policy
Trustpilot
Trustpilot
Click on a thumbnail to see more pictures for Natsuiro High School Seisyun Hakusyo

IntroducingD3 Publisher's open world love-adventure and photography game! As you arrive on the island of Yumegashima for your three month stint at Natsuiro High School you'll join a full cast of characters, including the all-female journalism club that haveenlisted you as their new photographer!

Players can freely explore their new island home by choosing between over 150 quests to carry out, interacting with the 300 inhabitants, fishing for strange items, and of course taking pictures of whatever, or whomever, inspires you!

Throughout the gameplayers will see characters with an exclamation markover their head, which indicates that players will have to make adecision when talking with them.This will often mean, but isnot limited to, choosing whether or not to accompany a girl from the journalism club as their photographer. Visiting the correct locations could mean changing the outing from work-related to a date!

The protagonist doesn't always have the best of intentions when he is behind the camera, and as a result the subject matter is as lewd as you want to be;from panty shots to those of scenic vistasand everything in-between. You'll have to watch your back though as there is a whole list of activities that could put the police, or your school councillor,hot on your trail!

If you are familiar with Natsuiro High School Seisyun Hakusyo, why not let others know?

The open world reminds me somewhat of GTA San Andreas- it is not of that size but shares the trait of filling space with nothing but landscape, the difference of course is that you can take pictures of the landscape here.... which is not the reason any of us wanted the game is it?

When you work out what you are meant to be doing (a lot of fetch quests initially,) there is a lot of fun to be had cycling round the island stopping occasionally to writhe, eel like across the cobbles on your back whilst trying to look up a girls skirt before she calls the police. If that sounds like fun (and it is,) Natsuiro is the High School for you.
[This review is based on another version of this product]
WraithFox (4) on 06, Mar. 2016 18:50 (HKT)
Interesting Attempt at an Open World Dating Sim.
This game is much more than an open world dating sim, with side quests to do for both potential love interests and random NPCs, that affect your reputation with individuals or with the general populace.

That being said this game does require a lot of knowledge of Japanese, as other reviewers have stated. There is no furigana so you'll have to do a lot of doing multi-radical kanji lookup on your favorite translation sites.

Even with the language barrier there is fun to be had for the very creative. This is an open world game, after all, so you have the ability to roam much of the island where the game takes place. Being a hell-raising hooligan is certainly a possibility but you do have to worry about getting the attention of authorities who will chase you down.

The graphics are....okay. Path finding for NPCs can be an issue. The game certainly isn't perfect and I've heard tale of some bugs that can kill progression so I would suggest doing your homework to avoid any situations like that.
rothwell.jcf (1) on 28, Sep. 2015 21:37 (HKT)
Anime in spades
This is a really fun game to play. There is a lot of kanji, and no furigana, but if you're at an intermediate level you can get by pretty okay as long as you've got a dictionary or google translate app on your smartphone. Lots of wackiness, plays pretty well. I definitely recommend this to you if you love slice of life style anime and you're at maybe N4 JLPT level of Japanese, definitely if you're at N3.
1 »