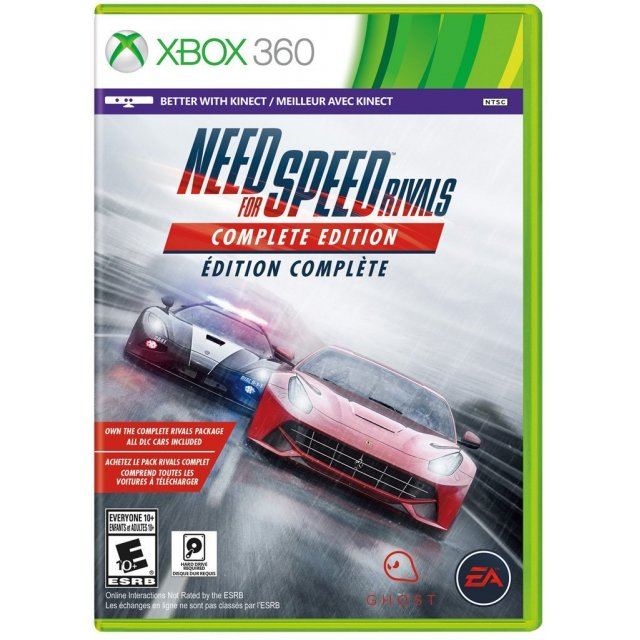 sold Out of print / Out of stock.
Manufacturer
Electronic Arts
Compatible With Xbox360™ (X360)
Version


Click on a thumbnail to see more pictures for Need for Speed: Rivals - Complete Edition

NFS Rivals Drifts back to Stores:

This latest release for the NFS series bundles the 2013 NFS Rivals along with previously released expansion packs and will be running in PS4, PS3, Xbox One, Xbox 360 and PC via platform Origin. Play as either the cop or the racers with each side having their own advantages, high stake challenges, consequences and rewards.

Take the rivalry to the next level with the game's intense chases, dazzling graphics and exhilarating action while riding in style in the finest automobiles the world as to offer!

Riding in Speed and Style:

Enjoy the fastest cars and the craziest chases once more with Need for Speed: Rivals' DLC inclusions listed below:

Ferrari Edition Special Compete Pack – Includes both Cop and Racer versions of these extreme machines - The Ferrari F40 and the Ferrari F50.

Simply Jaguar Complete Pack – lets you Includes both Cop and Racer versions of the Jaguar C-X75, the most advanced Jaguar ever created, the world’s first Hypercar - the Jaguar XJ220.

The Koenigsegg Agera One – The Koenigsegg One:1 is in a category of its own. It´s not a Supercar, not a Hypercar…It´s a One:1. The name refers to the almost impossible and highly sought-after ratio of one horsepower per kilogram.

If you are familiar with Need for Speed: Rivals - Complete Edition, why not let others know?

zeeyounis (1) on 12, Jan. 2016 02:04 (HKT)
Need for speed rivals
Excellent game even better with the 6 complete packs
Will Need to download them
Good priced game Takes about 2 weeks for delivery to the uk was worth it
May order again from play Asia
[This review is based on another version of this product]
leandrorizzato (216) on 22, May. 2015 05:02 (HKT)
Great Game!!!
Great game with a cool gameplay, graphics and sounds. Very fun to play with intenses races, but the history mode is not too good. This version comes with all DLCs and I really recommend it!!!
[This review is based on another version of this product]
dane.m.spear (1) on 18, Nov. 2014 09:04 (HKT)
Great game
Played this game non stop since it arrived. The racing and chases are intense. Only problems I have with the game is the lack of in depth story. The story doesn't have to be great because it's about the racing but the narrators are so bland and monotonr. Also sometimes there is so much happening on screen, red and blue lights flashing all around, sun glare in your eyes, it's impossible to see anything resulting in lots of frustration as you lose a racer or your position over a d ovrr again. But on the whole it is a great game and a fun experience