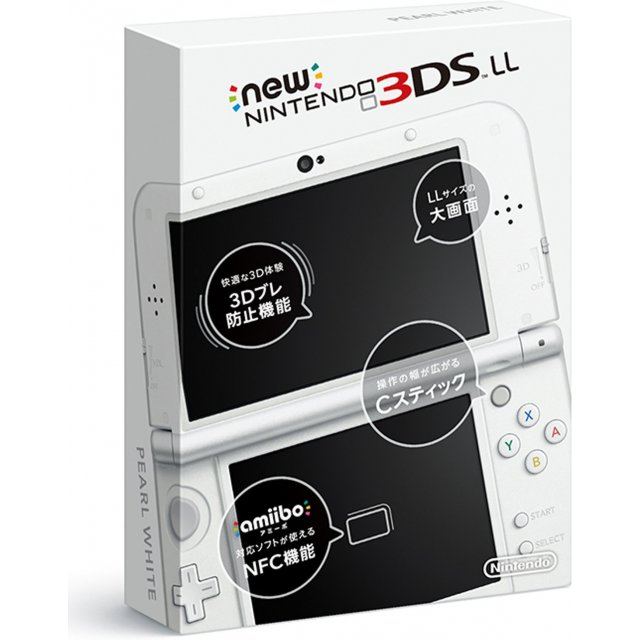 The New Nintendo 3DS features a better CPU than previous models allowing for faster eShop browsing and downloading. It comes with a built-in NFC on the bottom touchscreen for the amiibo NFC models.

The device is based on a custom Pica200 graphics processor from a Japanese start-up Digital Media Professionals (DMP). It has two screens; the top screen is a 4.88 in 5:3 3D screen with a resolution of 800x240 pixels (400x240 pixels per eye, WQVGA) that is able to produce a stereoscopic three-dimensional effect without 3D glasses, while the bottom screen is a 4.18 in 4:3 non-3D touch panel with a resolution of 320x240 pixels (QVGA). The 3DS weighs approximately 8 oz. and, when closed, is 5.3 inches wide, 2.9 inches long, and 0.8 inches tall. The system features several additions to the design of the original DS, including a slider on the side of the device that adjusts the intensity of the 3D effect, a round nub analog input called the "Slide Pad", an accelerometer, and a gyroscope. In addition, there is an infra-red communicator port situated on the top of the unit. The 3DS has two cameras on the outside of the device, capable of taking 3D photos and capturing 3D video, as well as a camera positioned above the top screen that faces the player; both cameras have a resolution of 640x480 pixels (0.3 Megapixel). The system also has 3D movie playback capability. Compatible with both Nintendo DS and DSi games, and a new generation of 3DS games.

If you are familiar with New Nintendo 3DS LL (Pearl White), why not let others know?

leon.buikstra (1) on 06, Apr. 2018 04:33 (HKT)
Solid handheld
Bought this primarily as a replacement for my old DS Lite, which was starting to show its age. The 3DS plays DS games perfectly. Only complaint is the 3DS' screen resolution is not a multiple of the DS, so the screen interpolation is a little uneven. (this is only a problem if you play DS games; 3DS games look very sharp)

Initial setup, configuring WiFi and loading up the Japanese eShop was very easy, and I managed to buy a 3DS game in under an hour after unpacking.

Note: the 3DS does not come with a charger. Order a separate one locally so you can charge it using your local power outlets.
winewingwing (2) on 16, Aug. 2016 19:21 (HKT)
Fast shipping
I think I received my new console 3 days after I placed my order, which was really quick! Extremely satisfied with the console, it is much faster than my old 3ds XL and I love the color.
sparklunalunar (19) on 09, Jun. 2016 11:29 (HKT)
Good upgrade
This new enhance of the 3DS have a faster CPU processor that make load games more faster even when enter the Nintendo eShop is quick to load all the info of the games and the downloading is also faster, i recommend this product to those who are fans of the Japanese only games buyers and also for those who want to simple update their gaming portable system.