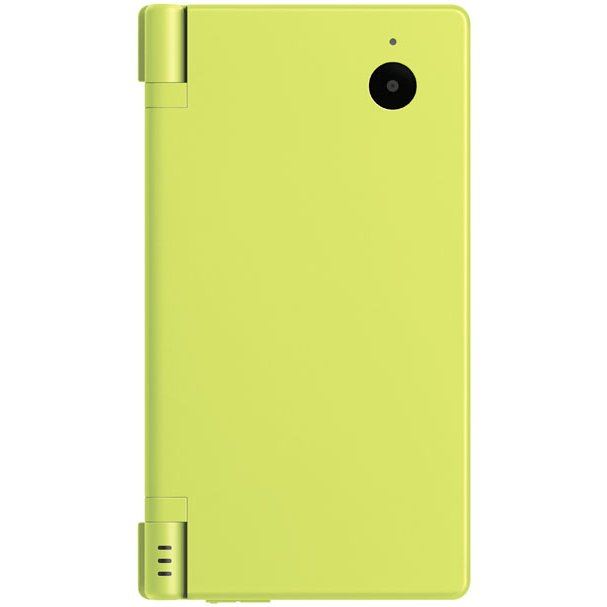 Japan
1w Expected stock arrival within 1 week
Price
US$229.99
Our previous price:
US$ 249.00
You save:
US$ 19.01( 8% )
Play-Asia.com Return & Refund Policy
Trustpilot
Trustpilot
Click on a thumbnail to see more pictures for Nintendo DSi (Lime Green)

The Nintendo DSi is the long-awaited successor to Nintendo's popular handheld video game console. Compared to the Nintendo DS Lite, the NDSi features a 17% larger screen and a 12% reduced size at a weight of only 214 grams.Further enhancements include two built-in cameras, SD memory card slot (allows you to save pictures and display them on the Wii™) as well as built-in browser and music playback function.The new Nintendo DSi plays all Nintendo DS™ games. Gameboy™ Advance game playback is no longer supported though.

If you are familiar with Nintendo DSi (Lime Green), why not let others know?

It truly is new in box like it has fallen through a time portal from 2009. It is also running it's original firmware, which is convenient for homebrew. I had forgotten what a fantastic upgrade the DSi was from the DS Lite. You lose a little battery life but it is still far more long lived than any of the current 3DS / 2DS handhelds. For that you get bigger screens, nicer layout, slimmer body and the ability to adjust the brightness on the fly. It's also great that it takes the same charger as my 3DS so I no longer need to carry the one for my DS Lite.

Setting up the Japanese model was quite easy - I managed to guess my way through although once I loaded up an English game I realised I had the date backwards. Easy enough to fix, and I can now recognize the Japanese symbols for day and month ;). One thing to note is that you can't use the camera unless you go through a very long tutorial on taking an image and making edits to it. Again, I had to guess my way through but it really wasn't that bad.

There is no region locking on NDS titles so now the console is set up I use it to play English games without needing to understand the UI.
[This review is based on another version of this product]
gregory.cromie (2) on 16, Aug. 2011 10:28 (HKT)
Outstanding
Amazing quality of product and the price was perfect. This console is a collectors item and comes beautifully packaged in bold red to celebrate the 25th Anniversary of Mario.
[This review is based on another version of this product]
doka (7) on 20, Jun. 2011 21:40 (HKT)
Nintendo DSi (Pokemon Black Edition)
Sweet as limited edition from Japan. Ordered through Play-Asia, yet definitely worth it. However, the Japanese DSis don't support English language - just Japanese only. However, the console region free and can play any DS games without the need to worry.

I will say the limited edition DSs are worth it, despite me only needing it to play games. So I wouldn't really worry about a Japanese UI. I don't regret buying this - so excited when I got it. Thanks Play-Asia!
[This review is based on another version of this product]
toraken13 (37) on 06, Feb. 2011 03:18 (HKT)
AWESOME Portable Console
I got it a coupla weeks ago. And I've done much more with it already, than I was able to do with my other DSs and Pokemon games. I've got a Japanese mystery gift already! I wish I'd gotten it when I got my Pokemon Black and White games. I so want to try other games now! I got an SD Card for it. Though it no longer plays GBA games, it is a clear advancement in DS consoles.
1 »