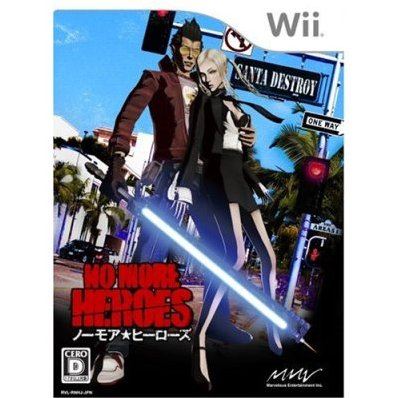 Marvelous
Compatible with Nintendo™ Wii (Wii™)
For JPN/Asian systems only.

sold Out of print / Out of stock.
Manufacturer
Marvelous
Compatible With Nintendo™ Wii (Wii™)
Version

In this adventure game directed by Goichi Suda (of Killer 7 fame), you play as Travis Touchdown, a normal guy (with an otaku geek streak to him) who wins a Beam Katana through an online auction and uses the weapon to start a new career as a professional killer. One day, an assassin named Helter Skelter appears before Travis and the two face off in a battle. Travis emerges victorious and finds himself in the presence of Silvia Christel, a mysterious French woman who claims to be an agent with the UAA. Silvia gives Travis official rank of 11 in the organization. Now, it's up to you to become #1.

If you are familiar with No More Heroes, why not let others know?

If you own a Wii:
For the sake of great, original action titles, buy this game.

If you don\'t own a Wii:
For the sake of great, original action titles, buy a Wii and this game
atkins_89 (1) on 29, Dec. 2007 02:44 (HKT)
THIS GAME IS THE BEST
its kinda like godhand a little i like everything about it they talk in english but the subtitles are in japanese best game ever
QATAR (18) on 12, Dec. 2007 20:37 (HKT)
The Best Wii advanture GAME !!!
Nice Gameplay and story , many people think this game is a totally (japanese) it`s true this is a japanese version ,
but Most of the important Keywords in the Game in (English) for example [SAVE / LOAD / MAP]
also they are talking in English
ONLY I CAN SAY IT`S The BEST Wii Game EVER
YOU MUST TO BUY IT .