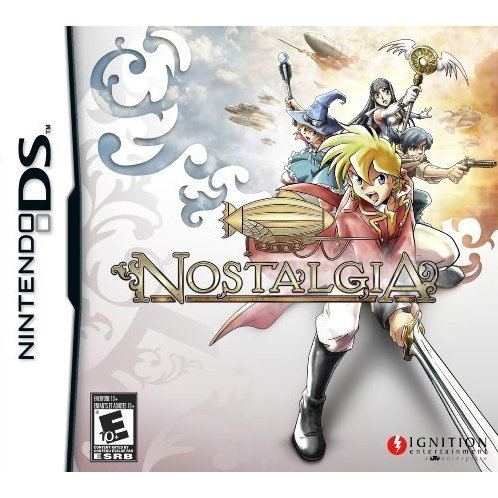 sold Out of print / Out of stock.
Manufacturer
Ignition Entertainment
Rated By Our Customers
Compatible With Nintendo DS™ (NDS™)
Version


Click on a thumbnail to see more pictures for Nostalgia

Set in the 19th century — “The Age of Adventure” — Nostalgia immerses gamers into a world filled with treacherous airship battles, elusive treasure hunts, and action packed dungeon combat. Prepare to visit popular cities such as Tokyo, London, New York and Cairo as you embark on a quest in search of a world yet unknown…

If you are familiar with Nostalgia, why not let others know?

gundamalpha (181) on 16, Feb. 2011 10:08 (HKT)
Name speaks for itself
Get this if you into traditional JRPG. The game is pretty decent by itself but the pace might put off some gamers getting on. I personally love classic styles though, so it's a plus for me.
x (34) on 31, Mar. 2010 14:06 (HKT)
NOSTALGIA DS
i was attracted to this game for two reasons: one, the rendered graphics (which are rare in a DS RPG), and two, the unique setting (a fictional turn-of-the-century world of steam power and airship exploaration). i was fully-satisfied by the game's execution of both, though slightly disappointed by the characters and story, initially. several hours into the game, i've been pleasantly surprised by it's unexpected depth. the characters still come across as fairly standard RPG offerings with relatively uninteresting relationships and interactions, but there is much more to enjoy in the game's world. the side quests, bonus dungeons and exploration are extremely addictive, and have really given this game a complex setting which i'm sure i'll miss once i've finished the story and explored every corner of it's world.
mdoherty (11) on 28, Feb. 2010 20:19 (HKT)
Enjoyable game
While not the most groundbreaking of games, Nostalgia offers just that if you're a long time player of jrpgs - a nostalgic, old-fashioned rpg game. It may not be the most innovative game out there, but it does what it does - classic rpg - well.
JeremyTMH (20) on 08, Dec. 2009 23:25 (HKT)
Good old nostalgia!
Its hard to find an RPG that's simply about the spirit of adventure, but nostalgia finally delivers after a long time waiting. Recommended for old skool RPG lovers and easy and straightforward enough to easily get into, just be warned the game can get hard for its airship battles early on.
casw50 (1) on 08, Dec. 2009 17:53 (HKT)
Nostalgia - A fun R.P.G.
This is a cheerful little old fashioned, turn-based RPG that tells the story of Eddie, a young adventurer who travels the world in an airship, battling on the ground and in the air. The locations are based on the real world, so knowing a bit of geography helps! While not too challenging, the game is light- hearted and the air battles are fun. With the sidequests and after-credit extras the game is quite long. If you like classic RPG's this is for you!
1 »