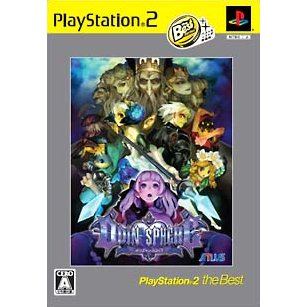 Atlus
Compatible with PlayStation 2™ (PS2™)
For JPN/Asian systems only.

The nations of Erion had always held an uneasy peace, as the various kings and queens watched each other for any signs of weakness. When the country of Valentine is obliterated by the power of an ancient artifact, it sparks a bloody war between the fairies of Ringford and the warriors of Ragnanival. Little do they know that they are acting out an almost-forgotten prophecy: one that, if fulfilled, will lead to the destruction of the entire world. Take control of the warrior princess Gwendolyn, daughter of Odin, and follow the threads of an intricately woven story as you uncover the truth behind the prophecy – and how to bring it to an end.

The story is explained in detail on the website, so the only way to find out more is to visit! We invite you to come and experience the enchanting world of Odin Sphere.

If you are familiar with Odin Sphere (PlayStation2 the Best), why not let others know?

game (63) on 27, Feb. 2011 03:05 (HKT)
Once Upon a Time...
Odin Sphere is one of those games that just sucks you in. More so than just the gameplay, I was really attracted to this game for the "feeling" it gave off. I don't know how else to describe it. Not only the art style which many people have already praised, but also the music, setting, and characters. Just the overall feeling of playing this game is what I mean.

Gameplay-wise, the game is fairly simple. Each stage is circle, and you can fully traverse it by running either direction, with the exception of towns, which are just straight lines. Combat is mostly just button-mashing, which is not necessarily a bad thing, but there is also some strategy involved. After each stage, you get items which can then be used in alchemy or cooking. Those are the basics of gameplay, nothing most people haven't seen. But it is executed well so that the game is fun.

While the gameplay does feel a little repetitive at times, the story really adds more incentive to play this game. The game tells the story of five different characters who stories are all related in some way. Each story was genuinely interesting. There was a bit of downtime between each story cutscence due to the length of completing each level, but you can go back and re-watch cutscenes.

And of course, everything comes to life with the artistic presentation of this game. Many have praised the style and it is well deserved. It really does almost resemble a fairy tale, with its unique cast of characters. In terms of graphical quality, everything is top-notch. The backgrounds are lush and the characters are animated with life.

The sound design provides the nice finishing touches. The music is memorable enough and the voice acting features a few prominent seiyuu. Kawasumi Ayako and Noto Mamiko are two of my favorites so I was pleased to discover they were main characters.

Overall, I recommend this game. But keep in mind that it is not just a recommendation based on the gameplay, but also just the overall experience of the game, including story and sound. Yes, the gameplay can get a bit repetitive but if you want a nice visual experience, then this may be worth trying.
daisukizutto (37) on 26, Nov. 2009 21:42 (HKT)
Not Bad
The character can only travel left or right direction. horizontal action role-play attacking mode.