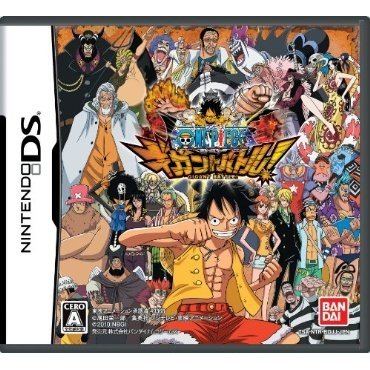 Works on all systems sold worldwide, a correct regional account may be required for online features.
1w Expected stock arrival within 1 week.
US$19.99
Our previous price:US$ 44.99
You save: US$ 25.00( 56% )
Manufacturer
Bandai Namco Games
Rated By Our Customers
Compatible With Nintendo DS™ (NDS™)
Version

Works on all systems sold worldwide, a correct regional account may be required for online features.
1w Expected stock arrival within 1 week
Price
US$19.99
Our previous price:
US$ 44.99
You save:
US$ 25.00( 56% )
Play-Asia.com Return & Refund Policy
Trustpilot
Trustpilot
Click on a thumbnail to see more pictures for One Piece: Gigant Battle

Recruit your own crew and take them to a face-off with all the greatest pirates in One Piece. One Piece Gigant Battle will transport you to all the locations in the anime, from the booby trap filled ships to the oddly shaped islands.You can fight one to one, or drag your friends into the fray. Turn on your Wi-Fi and a party of four can join in. Cooperate with another friend to do a tag battle or just jump into the chaos and do a battle royale. It's your stage, your fight, your style.

If you are familiar with One Piece: Gigant Battle, why not let others know?

albibishev (2) on 15, Feb. 2011 03:55 (HKT)
Awesome game!
Well, I really enjoyed playing it and the game is undoubtedly worth every penny I paid for it. To tell the thruth I was extremely disappointed that franky, robin and brook weren't playable, even though I had been aware of it for a long time. Although I can barely speak japanese, it wasn't difficult at all to understand the objectives of the missions, so I am fairly certain it's a must for every One Piece fan.
mandysama (7) on 14, Nov. 2010 10:48 (HKT)
Excellent Game!
A great game for any One Piece fan!
oatsama (24) on 05, Nov. 2010 16:52 (HKT)
best anime game !!!
I very like this manga&anime,so I decide to buy this game and I think it very cool.So, I think you must have it if you like One Piece !
John (11) on 30, Oct. 2010 17:41 (HKT)
One Piece Gigant Battle
OK yet another One Piece game to not get a US/EU release, for anyone wanting to buy this game I would suggest doing so only if you are a huge One Piece fan. The gameplay is very similar to that of Jump Ultimate Stars, with a few modifications and only One Piece characters, The game is however filled with trinkets such as; clips from the anime past and yet to come, lots of support characters(The best being the Author Eiichiro Oda) and cameo packed stages.
baphoment (22) on 18, Oct. 2010 23:25 (HKT)
Best Portable Game!!!
The game is simple, it's totally same as jump super star.
As, there are many unlockable character, which are playable and support character.
Unlock your favorite playable character now!!
1 »