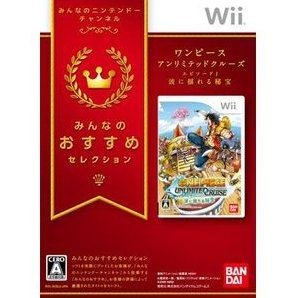 After Brook the walking skeleton joins the Makuwara pirates crew, the ship continues to journey to find the legendary treasure One Piece. After overcoming numerous hardships, the crew is sailing towards a chance to hunt down a legendary artifact.

While going into a unique territory, the crew got caught in a hurricane, and within the storm, a creature that emits a mysterious light appears before Luffy.

Using a device called the Gigant pistol Luffy attempts to catch the creature but instead of being the predator, the pirate ended up as the prey as the creature swallowed him whole.

When Luffy came to his senses after the ordeal, he is placed before a huge lighted creature surrounded with lots of smaller monsters. At that instant, Luffy heard the lighted creature say “Monkey D Luffy, do you want to claim your prize?”

After telling the excited Luffy about a hidden treasure within the territories, an island suddenly pops up along with giant trees. Hold on tight to yout Wii Remote control and Nunchaku, for you are going to an action packed adventure!

If you are familiar with One Piece Unlimited Cruise: Episode 1 - Nami ni Yureru Hihou (Minna no Susume Selection), why not let others know?

fiskmasis (26) on 05, Apr. 2011 00:44 (HKT)
One piece unlimited cruise 1
Its incredibly boring to play after you finish the game but before that its a really good game.
baphoment (22) on 18, Oct. 2010 23:33 (HKT)
Unlimited Cruise Episode 2 is better...
Episode one make me feel giddy easily when turning around but episode two.
The game is so much fun, and there are two different option to play, adventure and character battle.
One Piece Unlimted Cruise is the first ever game that played with stories.