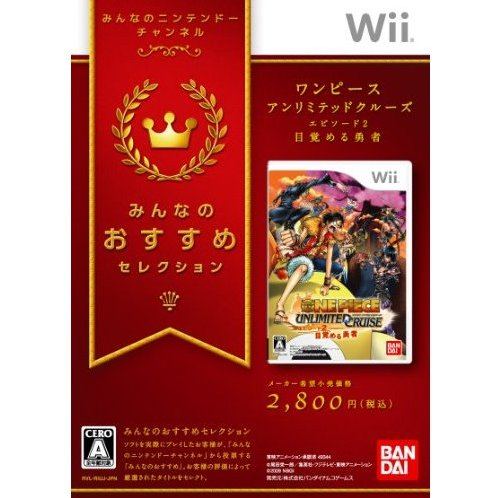 The adventure carries on with Episode 2. After clearing Episode 1, you can use its save file to access this game to continue with your quests. Original characters make their appearance and existing characters such as Luffy and crew get new fighting skills. Go into areas that are previously forbidden, such as Usopp's work shop and discover the little gadgets that he is mucking around with.To make your exploration easier, new vessels appear, Merry the ship now appears as a row boat which you can use to access places where larger ships could not enter. Comical elements persists, see what trouble Luffy gets into when he ignores warnings and how Nami berates Luffy, Brook and Chopper after they were bailed out of a particularly sticky situation.

If you are familiar with One Piece Unlimited Cruise: Episode 2 - Mezameru Yuusha (Minna no Susume Selection), why not let others know?

anthonyssnow1 (1) on 17, Nov. 2010 10:40 (HKT)
Good game wellworthit for fans
Greatest portion of this game is its versus mode over 40 characters, but the main game has a couple things some people wouldn't like lots of backtracking and the game is a continuation of the first game so it is better off getting both games you can fully play each by itself but you'll have a much more difficult time unlocking things. I happen to be a fan for the series so this game gets a good grade in my book
baphoment (22) on 18, Oct. 2010 23:34 (HKT)
The best game I ever had...
Adventure and battle mode, I spent nearly 130 hours to get everyone to max.
It's the coolest game ever, one piece hurray!!
One Piece Unlimited Cruise in Nintendo Wii, brings the first ever story mode game in one piece series!!