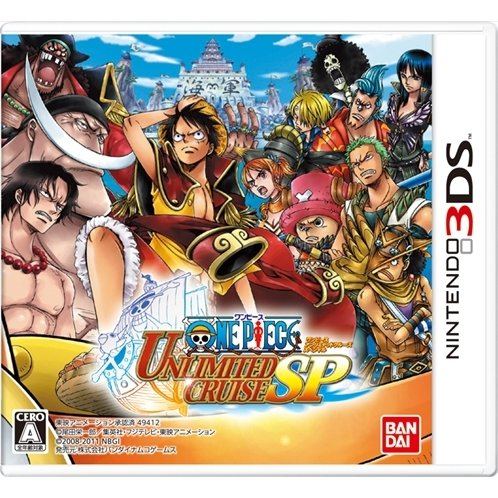 sold Out of print / Out of stock.
Manufacturer
Bandai Namco Games
Rated By Our Customers
Compatible With Nintendo 3DS™ (3DS)
Version

Sail off to the seven seas with Luffy and his gang in Unlimited Cruise SP. Bandai Namco Games collected contents from the 1st and 2nd episode in the series, and adds depth to the whole franchise through the Nintendo 3DS. Meet the strange creatures Kaburi and embark on an adventure on the peculiar island.Engage in the battles from the Marine Ford arc and fight with Boa Hancock, Ivankov and many other intriguing characters. The new interface makes controlling player characters even easier, so even complete novice pirates could become aces in no time.

If you are familiar with One Piece Unlimited Cruise SP, why not let others know?

legolasooi (14) on 06, Jan. 2014 15:43 (HKT)
Nice game!!!
Love OP so so much!!!
melindadwang (2) on 31, Oct. 2013 08:43 (HKT)
Lovveeee this!
Super fun! I love the sound effects, and Zoro is my favorite.
I haven't gotten far in the game yet since I have a lot of school work. But I do have a problem saving the game since I can't read Japanese at all. (Only a little bit since it is similar to Chinese)
The effects in this game is great. I love love love and am very satisfied that I got this.
alexandert90 (3) on 01, Nov. 2012 20:53 (HKT)
for anime fans
similarity to the anime is awesome! + original voice actors, cool character control~
mellon2552 (2) on 09, Aug. 2012 03:06 (HKT)
Pure Awesome
This is a must get game for One Piece fans. The Japanese is a easy read. The game play at times reminds me of Monster Hunter where you collect items to make things (I love the MH games). It is just a blast and I've only been through the first part!
vincent_caumartin (7) on 31, Jul. 2012 11:05 (HKT)
Not the best port I've seen
Alright, the biggest attraction here obviously is two games in one, plus new content. I've played through part 1 so far and I'm a little annoyed at the performance. Framerate drops are crazy when you beat enemies in Break Rush (this causes each enemy to drop ~8 HP/SP pellets plus an item), some visual and sound effects are missing (Zoro's 36 Pondo Hou looks like it's blowing wind at enemies, no slicing at all), some stuff is straight broken (Moria's super no longer hits enemies during survival mode). You dodge by double tapping B, which means jumping normally is sluggish.

That said, for everything slightly worse, the game is far more manageable if you want to 100%. Golden items are way easier to gather, fishing is way easier.

Marineford mode is actually really cool, IMO. In addition to adding a bunch of characters, scenes from the manga are recreated in cutscenes and you get to play nearly every major fight from both sides. (You also get to use a new super for Blackbeard based on what happened in the war *spoilers*). However, I should note that is IS just a series of battles after all. No adventuring like in the main game.

I do recommend this for those who didn't play the Wii games (but you'd better know japanese, just because you're missing half the fun if you don't). I recommend to those who want to 100% the games but didn't bother on Wii because it's nice time-killer during bus rides. I do NOT recommend to non-One Piece fans. Speaking as a video game enthusiast, these games are actually kinda bad.
1 »