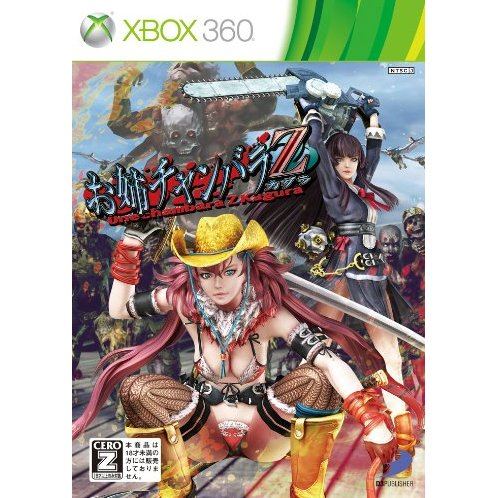 NTSC
1w Expected stock arrival within 1 week
Price
US$59.99
Our previous price:
US$ 89.90
You save:
US$ 29.91( 33% )
Play-Asia.com Return & Refund Policy
Trustpilot
Trustpilot
Click on a thumbnail to see more pictures for Onechanbara Z: Kagura

Sisters band together, girls get into bikinis and pick up their swords to fight enemies. Slaying monsters become more thrilling in Onechanbara Z. The battles are more bloody and the girls become more sexy. The newest game will get a Z rating, so be ready for some over the top action and fanservice sequences.

A new pair of sisters enter the fray. Kagura and Saya are half vampire and half imichi. Kagura was taken in by the vampires and is both hated and feared by the clan. She is sent to a dangerous mission when she met her long lost sister. Together the two combo ghouls until they shower blood and guts, fight the strongest in the world and find out the secrets behind everyone's schemes.

If you are familiar with Onechanbara Z: Kagura, why not let others know?

the good:
The combat system is really solid but sadly there are no enemies good enough for you to execute it.
The fan service is really top notch. I enjoy customizing the looks of the characters.

additional info for trophy hunters:
it's really a grindfest especially the orbs farming. after 6 playthrough and i am not even 2/3 of the progress.
[This review is based on another version of this product]
shanpocalypse (2) on 03, Aug. 2014 09:28 (HKT)
THE best Onechanbara game to date
I played the previous title- Onecahanbara Bikini Samurai Squad on the Xbox360, it was a fun B-grade or even D-grade game with plenty of bloody battles against hordes of Zombies and skimpy dressed babes...it doesn't even compare to this,

--It's TONES of fun, the graphical improvements are ten times better than the almost D-grade Bikini Samurai Squad, characters look excelent with nice details, and yes, the jiggle physics are there!

--Customization is vastly improved, much better accessories to unlock, all adding your own personal touch to the characters,

Onechanbara Z kagura is a game that's never serious and thats one of the things that makes it so great!

Note: For english gamers, the game is in Japanese, the games start screen menu's are in english which helps greatly, but the rest of the games menu's and dialogue is all Japanese, this isn't an issue since the story realy isn't that important, if your stuck, just google english translations.

[This review is based on another version of this product]
tml4life (181) on 01, Jul. 2014 12:13 (HKT)
Hack N Slash Fun
Onechanbara Z Kagura is probably the best onechanbara in the series. Although short, this game is good and I had lots of fun playing it.
[This review is based on another version of this product]
kittyn (1) on 28, Apr. 2014 20:15 (HKT)
Onechaambara Z Kagura
As the Onechanbara series I like I can not express a positive opinion for this chapter. For chapter 360 a few years ago I could make exceptions or to judge positively despite the shortcomings. But with the Z kagura I was expecting a lot more. Let me be clear, I find it fun and we've played. But the technique is all to review. The graphics are scandalous. Scenarios so skinny detail not even remember them in bullet witch. It is surprising especially the fact that quality is strongly fluctuating. It goes from free environments to some details that are more inspired. Too bad the textures always ruin everything and the serrations of the polygons are always present (especially on large screens and defined) Some character animations are ridiculous (see the race) and the audio is not far behind. Except the main characters are uninspired and other ripetutti exhaustion. The color palette dedicated to them is poor.
1 »