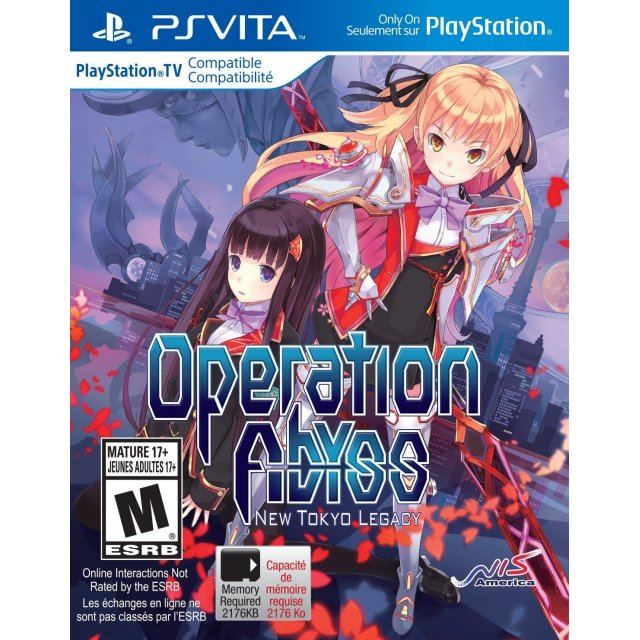 Works on all systems sold worldwide, a correct regional account may be required for online features.
24h In stock, usually ships within 24hrs.
US$29.99
Our previous price:US$ 44.99
You save: US$ 15.00( 33% )
Manufacturer
NIS America
Rated By Our Customers
Compatible With PlayStation Vita (PS Vita)
Version

Works on all systems sold worldwide, a correct regional account may be required for online features.
24h In stock, usually ships within 24hrs
Price
US$29.99
Our previous price:
US$ 44.99
You save:
US$ 15.00( 33% )
Play-Asia.com Return & Refund Policy
Click on a thumbnail to see more pictures for Operation Abyss: New Tokyo Legacy

From the creators that brought us Demon Gaze, Experience Inc. introduces a new blend of dungeon RPG in Operation Abyss: New Tokyo Legacy. A brand new first person dungeon crawler RPG set in a near future of Tokyo with a new gripping story mixed with heavy sci-fi elements and a setting to give the game a unique cyberpunk feel.

Engross yourself into the unique dungeon crawler setting of Operation Abyss: New Tokyo Legacy and lose yourself in the gorgeous world where real-life locations and stunning art are rendered throughout the game. In a once peaceful city of Tokyo, a little-known catastrophe is uprising with a great speed. Genetically engineered monsters called Variants and the emergence of portals that lead to a mysterious dimensions known as the Abyss keeps the city under constant threat.

To investigate this phenomena, the government has formed a secret organization for the variants annihilation, the Code Physics Agency (CPA), a secret investigating body which recruits teenage youth to be part of an elite team called the Xth Squad.

This Xth Squad (Xion Transhuman Squad) is a team who harnesses Blood Codes, a highly advanced codes developed by CPA that contains the genomes of history's greatest heroes and powerful abilities suitable to match against the menacing evil that’s uprising within the city.

Players will form their uniquely powerful team of Xth(Six) Members and face challenges within a labyrinthine dungeon where various traps, hazardous encounters, secret doors, and challenging enemies awaits. Customize each elite teammate’s classes, appearances, stats, expressions, and more to your very own preferences and discover what lies within the Abyss!

If you are familiar with Operation Abyss: New Tokyo Legacy, why not let others know?

dr.alexjon (18) on 27, Dec. 2016 14:51 (HKT)
Odd game
It's poorly planed out some times but other times it quite often it just doesn't seem like it knows what it want but still really fun for a d crawling adventure
e_pedraza_g (517) on 16, Dec. 2016 08:18 (HKT)
Rogue like goodness
A really good rogue like. if you like this type of games, you should not miss this.
yo.shinkyo (101) on 03, Sep. 2016 22:34 (HKT)
recommended!
great dungeon crawler! I must have if you are a fan of this genre!
cnepos1 (60) on 17, Mar. 2016 16:49 (HKT)
Very difficult.
The game is pretty good but only if you a) enjoy dungeon crawlers and b) are willing to devote a lot of time to it.
yoloman (130) on 16, Dec. 2015 00:24 (HKT)
Worst dungeon crawler game i have ever play.
First of all the dungeon is too huge to discover.
Example given morimoto high rise takes me like almost 3 hours to explore and uncover the mission. That is the first part of thr mission. It puzzle in this game are terrible to solves i mean the map. You have to figure out and draw yourself a map in order to warp from place to place (babyl sphere dungeon N3).
Worst of all your character has limited spell and the first part of the game they actually lock all your consumable item in which quantity you can buy until you clear the parts of the stories.
I like demon gaze style but this game is kinda really hard to play if you do invest time in it. It get's quite boring and repetitive and the mission you do won't earn much experience.
I did finish the post game till lvl 40 any believe me. Go and try out it has different experience than other dungeon crawler out there where this game really limit your skills and level.only plus side i can give it another star is character creation, even you went with your original team you won't really get you far. Poor stats kill you and only things that can let you survive in to grind good equipment.
1 »